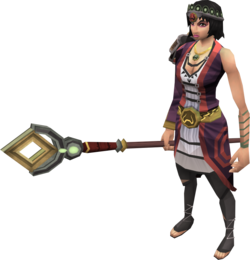 Caitlin is one of three Zamorakian cultists encountered by the player during The Blood Pact quest. Caitlin's staff can be obtained from her. Caitlin, along with her companions Reese and Kayle, abduct Ilona; an aspiring mage from the Wizards' Tower.

Caitlin was once a student of the Wizards' Tower herself. She shared a room with Ariane, a seer trainee with the power of precognition. Caitlin spread this around the other students, and they all shunned Ariane, believing she was using her powers to cheat.[1] Caitlin discovered Dragith Nurn's notes in the ruins of the old tower and worked with Reese, then an acolyte at the Lumbridge church, to find Dragith's secrets.[2][3]

Caitlin is the second cultist met by the player during the quest and attacks the player from across a small chasm with magic; making melee attacks impossible. It is no longer possible for the player to operate the winch and pass through the doors to fight her toe-to-toe, so using ranged or magic to attack her is necessary. When she reaches half adrenaline, she uses Asphyxiate, and when she reached full adrenaline, she uses the Omnipower ability. Once defeated she says Go ahead! Finish me!. The player is then given the choice as to whether to kill her or spare her life.

If she was spared, she later appeared during Festival of the Dead, mourning Reese.