From the RuneScape Wiki, the wiki for all things RuneScape
(Redirected from Cabin fever)
Jump to: navigation, search
The Old School RuneScape Wiki also has an article on: osrsw:Cabin Fever
This article is about the quest. For other uses, see Cabin Fever (disambiguation).

In Cabin Fever, you learn to become a pirate by aiding the shifty Bill Teach in running his ship, being finally rewarded with access to the island of Mos Le'Harmless.

It's war on the high seas, as Bill Teach tries to make the journey from Port Phasmatys to the pirate enclave of Mos Le'Harmless!

With his crew heading for the hills, he's looking to recruit anyone eager to become a pirate and help him sink the enemy before he ends up swimming home. He's offering a lot more than a shilling to join his crew. Have you got what it takes to be a pirate?

Travel to Port Phasmatys and speak to Bill Teach in The Green Ghost inn. Bill is the captain of The Adventurous, a ship which he claims is the finest ever to sail the seas. He needs a pirate to help him leave the port, but none will sail with him, not even his crew.

The night before, he had a heated argument with the captain of another ship, wherein the captain threatened to sink The Adventurous and put his crew 'to the sword'. Scared, all his crew members have abandoned him and he has no choice but to sail back to his home land.

Seeing his dilemma and wanting to be a pirate, you offer to help him. Although he doubts your plundering abilities, Bill accepts your help and tells you to meet him on his ship. Go to the Port Phasmatys docks, and board the easternmost ship, The Adventurous. Speak with Bill to set sail for Mos Le'Harmless and begin your journey as a pirate. 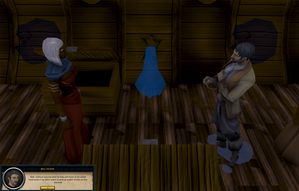 The Adventurous taking on water

As soon as you leave port, you see a cutscene, where an enemy pirate ship starts firing on The Adventurous, destroying the ship's hull and cannons. Bill calms you down and tells you to first take care of the enemy's cannon.

He suggests you grab some fuse and rope from the ship's lockers. Search the repair locker and take out four ropes, followed by procuring a fuse from the gun locker.

Climb up the ship's ladder to the main deck, and use the climbing net to climb up the main mast. Use your rope on the hoisted sail of The Adventurous to swing over to the enemy ship. Failing the jump will completely deplete your Energy.

The ship is populated by level 26 pirates. If you need to escape from them for a moment, climb up the net on the main mast. Find the cannon on the west side of the deck and use the fuse on the powder barrel next to it. Light the fuse to blow up the barrel and the cannon. Climb back on the main mast using the net, and using a rope, swing back over to The Adventurous. If you forgot to bring a second rope, you can find one in the south-west corner of the main deck of the enemy pirate's ship. 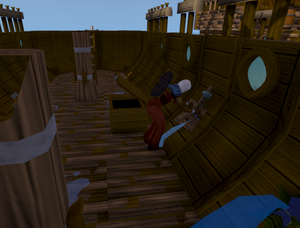 Now that you've controlled the offence, you need to build your defence. Talk to Bill and he'll want you to repair the damaged hull. Climb down the ship's ladder and search the repair locker for 6 repair planks, 30 tacks, and 3 swamp paste.

Each of the three holes takes two planks, ten tacks, and one swamp paste to fix. When you have enough resources, a message in the chat interface will say so if you try to get more than needed.

For each hole, use a repair plank and then a swamp paste on the ship hull to patch it up.

For attacking your ship, the enemy pirates need to be taught a lesson. Bill asks you to pillage the enemy ship and bring back their booty. Climb the net again, use a rope on the hoisted sail, and swing back over to the enemy ship.

Climb down the ship's ladder. Steal from the chest to receive 5 enemy plunder, and then climb back up to the main deck, and return to The Adventurous.

Climb down the ship's ladder, and use your plunder on the plunder storage at the back. If you leave the ship, you will lose the plunder and have to steal it back over again. 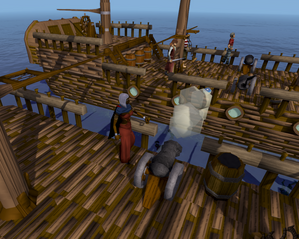 Firing the cannon at the enemy pirates.

Finally, Bill wants you to prepare a send-off for the enemy and a blast from the cannon would do just fine. The aim here is to prepare and fire the cannon when the pirates are directly in front of it.

Climb down the ship's ladder, search the gun locker, and take a cannon barrel. Trying to take anything else at this point will result in the message "You do not need a <item name> right now." Climb back up and left-click the broken cannon to fix it (The cannon will have the option "Repair broken cannon"). Talk to Bill again, then go below and search the gun locker for a ramrod, a few fuses, and a cannon canister. Return to the main deck, and choose the take-powder option from the powder barrel next to the cannon.

Gunpowder can be obtained from the powder barrel located right next to the cannon, just left click the 'take powder' option.

Be sure to check your chat box after firing each cannonball, because the cannon hit is RNG based, and will miss often. It will most likely require you to fire more than 3 cannonballs before moving on to the next part of the quest.

If you miss, use the ramrod on the cannon to clean it out and then repeat the steps, until you score a hit. If you don't clean the cannon, it will explode from the previous unused gunpowder. If this happens, replace the broken barrel with a new one from the gun locker.

When you hit the pirates with the canisters, talk to Bill. He tells you to sink the enemy pirate ship by blasting holes in its hull; three would be enough. Go down below, and search the gun locker to take three cannonballs. Up on the main deck, clean the cannon out with a ramrod and then repeat the steps until you have hit the enemy ship three times. 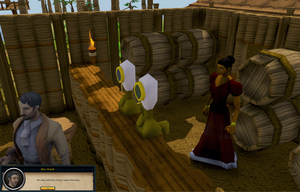 Following your third hit of the enemy pirate ship, you see a cutscene with Bill Teach talking with Mama Le'Fiette in The Other Inn. Bill then thanks you and gives you a Little Book o' Piracy, to add 'pirate' to your vocabulary as your ineptitude at speaking 'pirate' annoyed him to no end in the voyage. 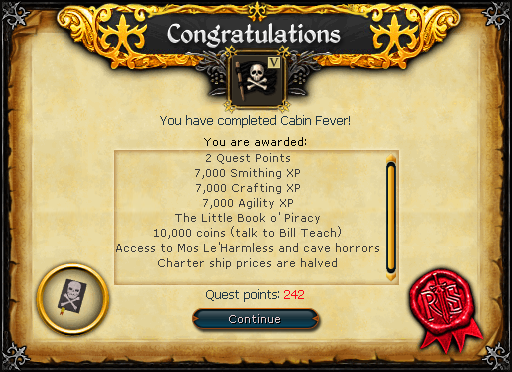 Cabin Fever is directly required for the following quests/miniquests: