From the RuneScape Wiki, the wiki for all things RuneScape
Jump to: navigation, search
The Old School RuneScape Wiki also has an article on: osrsw:Cabin boy Jenkins

Cabin boy Jenkins is a crew member on board the Lady Lumbridge. When Klarense sells the ship to an adventurer seeking to slay the dragon Elvarg, he stays in service of the ship, his employment transferred for free.[1] When asked about finding a new captain for the ship, he mentions that most captains are scared of Elvarg and won't sail, but he believes there is a captain in Draynor Village who will.[2]

Having convinced Ned to join the crew, the slayer voyages to Crandor. Before they reach the island, Elvarg attacks, setting the ship alight and incinerating Jenkins, who had insufficient protection. 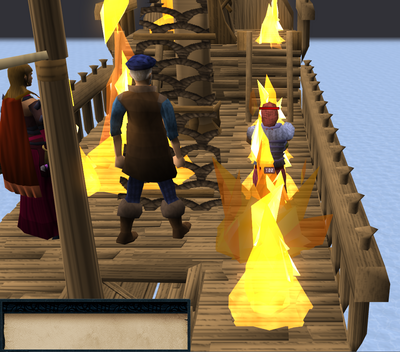 A reason why good defence is needed to face Elvarg