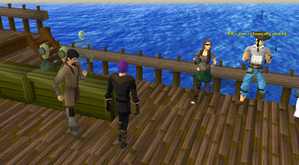 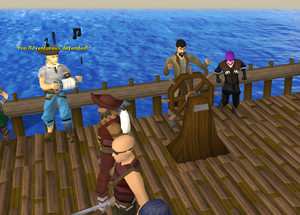 Cabin Fever is a song which can be listened to by players who have completed the Cabin Fever quest. It is performed by Bard Roberts and the Stanky Penguins. As with all of Robert's songs, it is composed of 4 limericks (AABBA rhyme system) that provide a synopsis of the quest, along with a cutscene involving:

The cutscene also involves a bar, a ship's wheel, and an exploding Cannonball thrown by the player.

At the Green Ghost in Phasmatys,
Ye had offered yer help gratis.
Bill Teach were his name,
Sailing were his game,
But he lacked the apparatus!

'Twas nay a ship he was lackin',
But his crew had all gone packin'.
Bill's men had all fled,
Filled with fear 'n' dread,
Of his enemies attackin'!