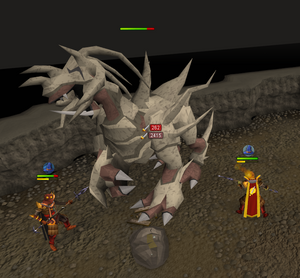 The Corporeal Beast is a boss monster that can be fought after completing the quest Summer's End.

Despite being categorised as mid-level boss, the Corporeal Beast is significantly stronger than most other bosses around its suggested level in solo encounters.

The Corporeal Beast is a level 785 boss monster that possesses 100,000 health. All of its combat stats are level 75, and it has 40 affinity towards all combat styles. Despite this, it is much more powerful than its combat stats suggest.

The most important mechanic the Beast possesses is that all damage dealt by a weapon other than a spear or hasta is reduced by 50%. Like tormented demons, switching to an appropriate weapon will still deal full damage (e.g attacking with a Zaros godsword and then switching to a mizuyari), although it is extremely unnecessary.

Alongside this, the Beast will devour any summoning familiars deployed by the player, healing the beast by an amount equal to the familiar's health when it was consumed.

Alongside these mechanics, the Beast has one final mechanic in which it will summon a level 105 dark energy core (possessing 3,500 health) at random, although hits that deal over 5,000 damage will prompt the Beast to almost immediately launch a core in response. The core is placed around the Beast, upon which it will track any player in the chamber. Upon doing so, if there are any players within a 3x3 AoE of it (the core itself being the center), it will rapidly deal up 400-600 hard typeless damage every tick which is converted as health for the Beast, and also drains prayer points by 20 in the process. Poisoning the core will stop it from sapping nearby players' health, although it is simply best to take it out with AoE abilities. There is no limit to how many cores the Beast can summon.

Equip your best melee armour and bring the best spear you can obtain. Spears are now available up to tier 92 (Masterwork Spear of Annihilation); players on a budget may wish to take the cheaper spear of annihilation (tier 90) or Mizuyari (tier 85) instead, or Masuta's warspear (tier 82) for the extra range. Due to this, accuracy will be below 100% unless the Beast has been struck with an affinity value of 2 or higher; Quake should take highest priority to ensure maximum accuracy rates. You can also combine the Ingenuity of the Humans ability with a switch to the Guthix staff for the Claws of Guthix special attack to increase affinity, however, this requires you to have sufficient runes required to cast autocast spells.

Simply use a melee rotation of your choice to fight the Beast. If the Beast's magic attacks become too damaging, it is recommended to use Debilitate or Devotion to temporarily mitigate damage from them. A scrimshaw of vampyrism with Soul Split flicking is highly recommended to counter the highly damaging magic attacks.

Whenever a dark energy core spawns, it can be taken out with a single AoE ability - Hurricane and Cleave often kill it in one blow. Although uncommon, a second AoE ability may be needed, such as Quake or the other AoE ability that was not used. If none of these abilities are available for the time being, it is best to run around the Beast so that the core has to keep tracing the player; simply remaining still is unfeasible as it adds unnecessary time to the fight, more damage and drains your prayer points quickly. One strategy to help stun the dark core is using an Oldak coil, which has larger range than a Kinetic cyclone.

Weapon poison and dreadnips are recommended to deal additional damage, as the Corporeal Beast is not immune to poison.

68+ with extreme invention potions. All prices factor in the number of tries required to get each perk at level 85.

Using a spear or other 2 handed weapon allows the use of Quake, which lowers defence and should be used at the beginning of the fight to reduce the Beast's affinity and increase the player's hit chance. The Zaros godsword's Black Hole special can also be used to temporarily increase damage without taking increased damage yourself. It is also recommended to unlock Greater Barge ability codex to bleed your assault at the start of the fight; in conjunction with the aforementioned Black Hole special or Berserk if possible.

Pulverise deals a hefty amount of damage as well as reducing the damage the Beast will inflict by 25% for 30 seconds, although Berserk should be used to increase kill speeds once comfortable with the boss fight.

When Devotion is being used, it is best to run back and forth to only be hit by the Beast's magic attack during that time, making use of the ability effectively.