Buyers and Cellars is a quest in which you help Darren Lightfinger, aspiring guildmaster, establish a guild of thievery.

While some find their fortunes in forsaken lands battling dangerous monsters, the opportunistic adventurer knows that there is wealth to be had all around: in guarded vaults, trapped safes and the fattened purses of the rich and careless.

With naught but a capacious cellar, an extensive vocabulary and a dash of derring-do, rakish confidence trickster Darren Lightfinger hopes to establish an official Lumbridge Thieves' Guild where all proponents of his time-honoured profession may pursue their various business interests.

Darren has sent out feelers for assistance, promising rich rewards to the person who helps him bring his plan to fruition. It's never wise to trust a con-man, but this is too good an opportunity for a resourceful rogue to pass up.

Start by speaking to Darren Lightfinger in his cellar, accessed through a trap door behind the house north of the Lumbridge furnace. He'll tell you that he plans to build a hideout for criminals from all over the world; ironically, he has no money to create and run the guild. When asked what he has in mind to raise the required funds, he says that the city of Lumbridge has a stashed golden chalice and he has found an eager client for it.

The only glitch in the plan remains that of retrieving it from the Lumbridge Castle bank. Darren tells you that he will have his right hand, Chief Thief Robin, investigate into the owner of the chalice but would like you to perform the act, in exchange for great rewards.

Accept Darren's request and he asks you to pickpocket the dummy first. Each pickpocket gives 8 experience, so lower levelled players can train on this and acquire quick levels. 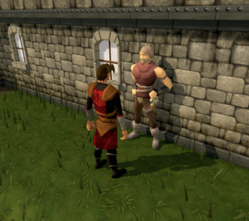 Robin waiting for you at Lumbridge Castle

Once you're experienced enough, he tells you to meet up with Robin in the castle grounds for further instructions.

Exit the cellar and head to the Lumbridge Castle. Speak to Robin along the southern wall and he'll inform you that the owner of the chalice, an angry old man, has withdrawn it from the bank and headed south towards the swamp. He recommends avoiding violence, since a priest is favoured by the gods, and suggests pickpocketing instead.

Leave the castle and head south into the swamp, chopping down a swamp tree there for some logs. Continue south until you reach a small hut, occupied by an old priest named Father Urhney. 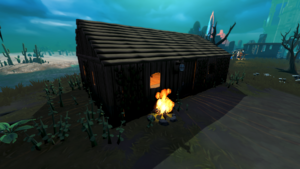 Speak to Father Urhney about the chalice and ask him whether you could hold it; he refuses to take it out from the display case. If you try to pick his pocket you'll find that you need some way to distract him. You can optionally return to Robin for help and he'll suggest engineering a crisis – a fire outside his window should do the trick.

Back at Urhney's house, light a fire outside any of his open windows. Talk to Father Urhney and mention the chalice again, followed by the option: "Fire! Fire!". Driving him into a momentary panic, quickly pickpocket him to get a complex key. Use the key to open the display case and steal the chalice.

With the chalice in hand, head back to Darren back at the Thieves' Guild, and he'll officially instate you as a guild member for a job well done. 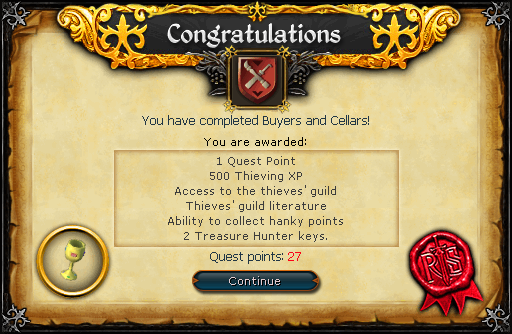 Buyers and Cellars is directly required for the following quests/miniquests: