From the RuneScape Wiki, the wiki for all things RuneScape
Jump to navigation Jump to search
This article is about the modern day woods. For the woods before the Fall of Hallowvale, see Hallowglade. 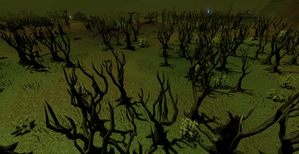 The Burgh de Rott Woods, formerly known as Hallowglade, is the unofficial name given to the small piece of woodland between Burgh de Rott and Meiyerditch. After the Fall of Hallowvale Lord Drakan and his troops destroyed the woods and turned it into a swampy, dead area, like the rest of Morytania. A bit to the north are the Barrows, where the Barrows brothers have been buried, mercenaries who tried to reclaim Hallowland from Zamorak. Nowadays, the woods only contain swamp trees and small plants and bushes, infested by Vampyres. There is an open hill in the western part of the woods, where many aggressive Vyrewatch are flying, waiting for prey.

These woods are an excellent place for killing vampyres, if one has a silver weapon. Level 45 Vampyre Juveniles roam the area, accompanied by level 54 Vampyre Juvinates. If a Guthix Balance Potion is not taken, the vampyres will transform into a mist instead of dying when on low health. Level 110, 120, 130 and 140 Vyrewatch patrol the woods. These can only be killed using an Ivandis flail or blisterwood weaponry. They drop their vyre corpses, which can be cremated in the Paterdomus temple for a variety of rewards.

During The Darkness of Hallowvale, the small boat to Meiyerditch is repaired. It can be found on the dock in the south-western part of the woods. This is usually vampyre-free, although one specific level 140 vyrewatch tends to follow one there if they are attacking them already. After the quest, it can be freely used to go from the woods to Meiyerditch and back. 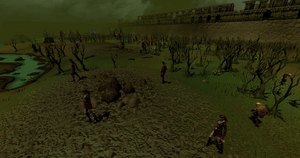 Along the southern coastline, there are numerous net and harpoon fishing spots. Due to the remote location, these are always unused. The attacking vampyres can be quite annoying and dangerous, but the two spots on the dock should be safe, most of the time. There are also a few fishing spots south of Burgh de Rott itself, where there are no vampyres whatsoever. All the fish can be banked in Burgh de Rott, possibly making it a better place to fish than Musa Point. There also is a Fish Flingers fisherman there.

In the very north-eastern corner of the woods is the gate broken, resulting in a climbable stile. This requires no Agility level and can be used to go from the woods to the Barrows and vice versa. A bronze pickaxe spawns on the aforementioned, vyrewatch-infested hill. Unlike those in Meiyerditch, the vyrewatch in the woods will never stop you to demand a Blood tithe, but will only attack.