From the RuneScape Wiki, the wiki for all things RuneScape
(Redirected from Burgh De Rott Ramble)
Jump to: navigation, search
The Old School RuneScape Wiki also has an article on: osrsw:Temple Trekking
For the version of this minigame prior to the 17 August 2011 update, see Temple Trekking (historical).

A journey succeeds if the player and follower reach the destination. A journey fails if the player or follower is killed. If the player teleports out of the minigame, enters the lobby, or gets disconnected, they can speak to their follower at the start point and choose whether to abandon or continue the journey where they left off. During this minigame, the player can train their companion to make them stronger in combat and/or to unlock their abilities. It is recommended to make monsters aggressive towards the player, turn off auto-retaliate, and wait for the companion to attack and kill monsters. Using this method, companions can get many levels, while fighting a single monster. Good armour and food may be required.

Leveling all companions to max level completes the achievement Complete Trekky, required for the trimmed completionist cape and master quest cape, and is a prerequisite for the elite Morytania achievement, Thoroughly A-Ghast. 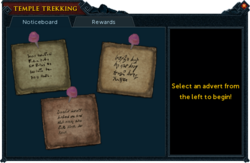 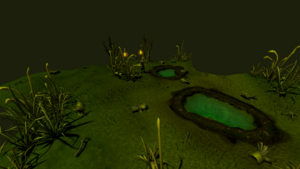 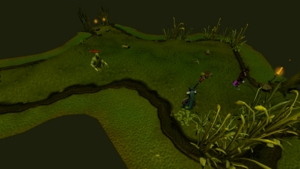 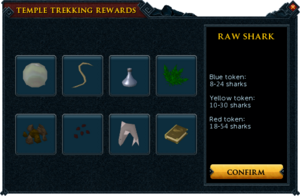 There are three types of rewards. Rewards from reward tokens, follower rewards and drops. After successfully completing a trek, the follower will give a reward token, which will be blue, yellow, or red tokens depending on the follower chosen, route chosen, how well events were handled and the amount of damage the follower took. You can exchange your token for rewards by leftclicking the token. Even though the examine text says "exchanged at Burgh de Rott", you can claim your reward anywhere. You will not receive a reward if your follower does all the attacking, when every event is evaded or when your follower teleports out due to low health. If your inventory is full upon arrival at the destination, your reward will be sent to your bank, or dropped on the ground if your bank is also full.