From the RuneScape Wiki, the wiki for all things RuneScape
Jump to: navigation, search
Broken unity machine? (edit) 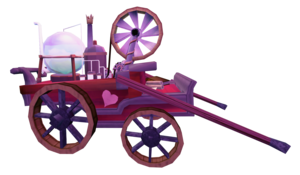 The Broken unity machine is a device created by Wizard Deedit, released alongside the 2017 Valentine's Day event. According to Wizard Deedit, the device was created on 6 February 2017 with the purpose of gathering amorous energy in order to "bring about love and harmony" within Gielinor. On the release date, the machine released its accumulated energy; however, it proved to be far more powerful than Wizard Deedit anticipated, and the energy attracted many crashed devotion rocks to the surface of Gielinor, coming to rest at the Lumbridge Crater. Upon releasing the energy it accumulated, the unity machine became broken.

Throughout the duration of the event, players may aid Wizard Deedit by attempting to fix the unity machine (using Magic or, if unlocked, the Invention skill) for experience, devotion dust, and reputation points for the event. Using either Magic or Invention could also be selected directly through right-clicking the machine. One action was performed automatically every 3.6 seconds and at 99 Magic and 88 Invention it yielded 118.8 Magic or 125.3 Invention experience.