A broken pickaxe was an adamant pickaxe that had been broken in an exploding rock random event. Broken adamant pickaxes could be fixed at Nurmof's Pickaxe Shop in the Dwarven Mine or at Bob's Brilliant Axes in south Lumbridge. The repair fee was 107 coins.

As of the random event update, this item is now discontinued. All of these items in players' banks were turned back to regular pickaxes of the corresponding metal. 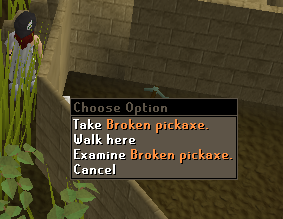