From the RuneScape Wiki, the wiki for all things RuneScape
Jump to navigation Jump to search
For the achievement, see Bringing Home the Bacon (achievement).

Bringing Home the Bacon is a quest about reviving the importance of the currently neglected pigs.

To start, talk to Eli at the pig pen of Falador Farm north of Port Sarim. The Explorer's ring 3 will allow you to Cabbage port to the Falador cabbage patch slightly east of it.

Eli will introduce "bacon", a new type of meat he has discovered and named after himself, to you by giving you a sample of it. Click the bacon to eat it and give your opinion. Eli wants to advertise pigs and explain how they are no longer useless animals, but serve as delicious meat. A cutscene occurs, laying out the plan to you. 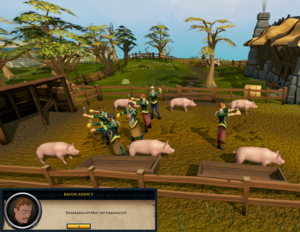 A group of Bacon addicts come to the farm in search of bacon.

Multiple locals have come to the farm in order to taste more bacon, however Eli initially believes they want to eat him instead. Eli explains how he gave a few a taste and now they are addicted. They open the gate and begin to lay butter on the pigs. Eli orders you to make decoys to distract the addicts.

Eli gives you a bacon heap and 9 planks, and can obtain more later by asking him. Build pig decoys at the hotspots in the centre of the field. First build it up with the planks, then add the bacon. Do it for all three decoys. You will need to continually add bacon to the decoys until Eli leads all the pigs out of the field.

After Eli has led all the pigs away from the addicts, you will be taken to the cellar of the house. Talk to Eli and he will explain that he wants to train pigs to gather people's attention. Answer based on which pig pet you would like. Then go to Martin the Master Gardener who can be found in Draynor Village.

On the way to Martin, there is a wheat patch East of Draynor Village. Pick the wheat if you did not acquire any wheat yet.

Talk to Martin and ask to take one of Pigzilla's piglets. He will explain that he has been pickpocketed and wants you to give the culprit a good "kicking" before he will give you one.

Head north west and talk to each character. They will each say who each other was with. The person who was not mentioned by anyone is the culprit who pickpocketed Martin. Accuse him and then a cutscene will occur. The culprit is different for each player. 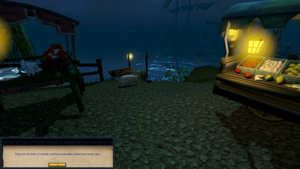 Oh look! A piglet and a kitten!

Martin orders you to punch the culprit, and you do so. However, they both complain that it was not enough, so the camera view directs you to a kitten and a pig, while your character savagely thrashes the culprit. Meanwhile you hear the voice of a narrator commentating on the two little creatures' adventures to the symphony of your bludgeoning of the pickpocket and his cries of pain. After the beating, Martin will give you the piglet.

Head back to Eli in the storm cellar and hand over the piglet to him. Eli will then ask you to create a machine to train the Pigzilla piglet up into a fully grown pig. Go into the northern room and click to build the machine. Eli will supply you with what you need. Head back to the machine and click to upgrade it.

Eli will then ask you to get him 5 wheat. He will then explain that he wants to make the addicts fall asleep with a sleeping potion. Go back outside and put some bacon on the fake pig decoys, then drug the bacon. However, after the addicts eat the bacon, they do not fall asleep. Return to Eli and he will explain that the potion takes some time to work.

He will then ask you to get him 5 fresh picked onions. They must be obtained from a field after he asks for them, or he will not accept them. The closest onion patch is south of Draynor Village bank. Alternatively, you can use a Clan vexillum teleport and run south-west to the onion patch north of Rimmington. 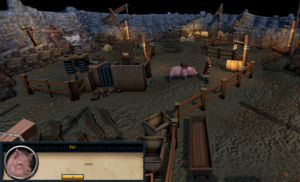 The Pig emerges from the machine.

When returning to Eli, the addicts have disappeared and the pig is fully grown. You will hand over 5 onions to him. Now click on the machine to train the pig. A cutscene will occur where the pig enters the machine. The pig will exit wearing equipment relevant to the type of machine you made: a knapsack for a beast of burden, pots and a knife for combat, or a really small altar for prayer. 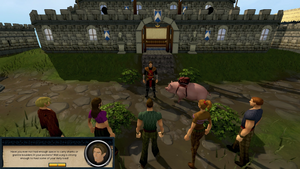 Convincing villagers of the benefits of pigs.

Eli will then ask you to take the pig to the Lumbridge Castle courtyard, the Varrock Marketplace, the Ardougne Marketplace, and near the north Falador gate. He will give you a Pig display list to help you keep track. The cities may be visited in any order.

Make your way to Lumbridge and go into the castle's courtyard. Walk the pig and a cutscene will occur where several men and women will gather around you wondering why you are carrying a pig. You will explain how useful the pig is, the way depending on the option you chose for how pigs could be useful.

Now travel to the city of Varrock and walk north to the market square, south of the palace. More people will come to your attention and favour pigs. Go to Falador next and praise porcine procreation in the western marketplace of the city. The characters will again cheer for you and the idea of raising pigs. Finally, visit the East Ardougne marketplace in the easternmost part of the city. Once again, more characters will surround you and idolise pigs.

The order in which you visit the cities doesn't matter. You do have to wait for your character to cross the city off the list, or you will have to go back. After going to all four cities, return to Eli and he will say that the plan was a success and he will reveal bacon in a year's time or so. 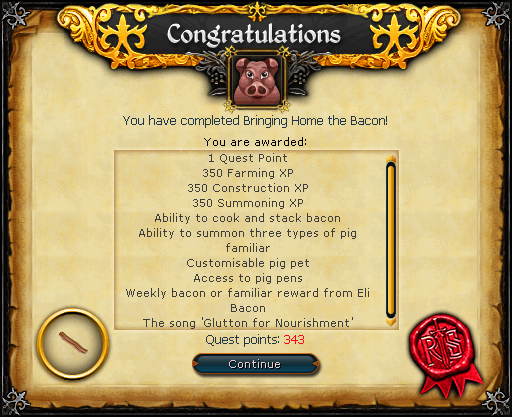 After the quest, you can upgrade the pig creation machine using Construction, giving you access to stronger pig familiars.

Bringing Home the Bacon is not currently required for any quests or miniquests. However, ironmen accounts will need to complete it in order to complete the Infernal Source dig site mystery Contract Claws.