From the RuneScape Wiki, the wiki for all things RuneScape
Jump to: navigation, search
Bright reindeer-terrorbird mount? (edit)

It could also be obtained from Solomon's General Store for free for December 2017.

It can be wielded in the main hand slot to make it appear as if the player was riding a terrorbird. It also changes the player's facial expression. 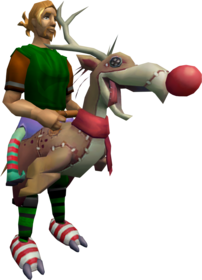