From the RuneScape Wiki, the wiki for all things RuneScape
Jump to navigation Jump to search
The Old School RuneScape Wiki also has an article on: osrsw:Brewing

Brewing is a sub-category of Cooking which is much more complicated and time consuming than the cooking of other foods, but the results are quite useful, for most of them boost assorted stats. Mature ales, especially if collected in calquat kegs, are very valuable. 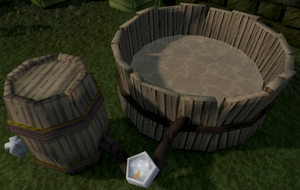 Greenman's ale fermenting in the vat of Port Phasmatys' brewery.

To brew ales, you have to use the fermenting vats located in breweries. There is one brewery located on the east side of the River Kelda (upstairs in the pub) in Keldagrim, and another one located in the basement of the pub in Port Phasmatys. Each location has only one vat, which must come to completion before another ale can be attempted. One can left-click on an empty fermenting vat to be brought to a one-click menu for brewing (with or without using the stuff). Alternatively, these steps can be followed to brew manually:

A player retrieving their ale from the barrel.

The contents of the vat will change colour as the fermenting progresses, becoming very noticeably different when the ale is ready.

To make cider, 16 cooking apples, a pot of ale yeast, and 4 empty buckets are required.

Buckets of water are not required to make cider. The stuff can be added when brewing cider to increase the likelihood that the cider becomes mature.

With normal brewing, a player can randomly make matured ale, shown by a (m) appended to the name of the drink (or (m1-4) for a calquat keg, noting how many pints are left in the keg). Matured ale is stronger than normal ale, providing an additional +1/-1 to the ales original boosts (example: dwarven stout +1 Mining/Smithing, dwarven stout (m) +2 Mining/Smithing).

The stuff is available from Honest Jimmy for 5 pieces of eight, which are a plentiful reward at the Trouble Brewing activity, or from Stanley Limelight Traders for 2 thaler. It is highly recommended that a player attempting this activity read the guide on how to play it beforehand. The stuff increases the chance of the ale you are brewing becoming mature by 50%.

The stuff must be added right after the barley malt is added. If the player tries to add the the stuff after the distinguishing ingredient or yeast instead, it will be too late, and they are told the stuff can't be added to the vat.

The stuff is not required to make a mature ale; it simply increases the chances.

For a cost-analysis of brewing each ale, see Calculator:Cooking/Cooking various items

All player made brews can be collected in either beer glasses or calquat kegs. If the player decides to use beer glasses, one vat will produce eight glasses of the chosen brew. If the player uses calquat kegs, one vat will produce two kegs each with 4 doses. Calquat kegs are considerably more valuable and do not need to be grown by the player using them (especially since they're cheap when empty). The increased value stems from the fact that a keg allows a player to stack up to four appropriate boosts into one inventory space instead of 4 separate glasses of beer. A calquat keg, when filled with a brew, take on the name of the brew it is filled with, in the general form: [ale name] (4), with the (4) noting how many doses it still contains. Mature ale is only slightly different, following this form: [ale name] (m4), "m" noting maturity, and the number noting the number of doses remaining.

All brews have a mature version. A mature ale has increased potency compared to its counterpart. Any mature ale will increase the basic boost of that ale by approximately +1 or +2 varying with the appropriate brew and it is effects. All ales except Moonlight mead decrease attack, and all ales except Asgarnian ale, Dragon bitter, and Moonlight mead decrease strength. Some of the brews have a variable boost amount which is relative to the player's level, boosting more as the player's level increases. Mature ales also have increased stat decreasing effects of the same general increased potency as they are bonuses.

For players interested in larger scale production of ales, the question of "is it ready" comes up very often. The answer boils down to: several days. Ale making is very slow, and once the vat is started, there's nothing to do except come back later and collect it if it's ready.

In exact function, ale has a chance to perform an action called "turning," every 12 hours. At each interval, one of 4 things can happen:

Once an ale has "Set," which will be noted by a deepening of the colour of the liquid in the vat, it will continue to brew. Set ales continue the same standard process as the previous stage, with similar chances, again taking place every 12 hours. Once the ale has "set" a second time (noted by a very obvious texture change of the liquid in the vat), it will be ready to collect. Ales go mature, if they mature, during their final "set" phase only. Going mature vs not going mature is completely random in nature, but is aided by Cooking level and greatly aided by use of the stuff.

After the second setting, the ale will no longer continue to brew, and will remain as-is in the vat until harvested. If the ale has finished and is not mature, it no longer has the chance to become mature, nor will it go bad.

The reality is that most batches of ale take around 3–5 days to finish, grouping mostly around the 3-4 day range. 2-3 day batches completions are uncommon, but happen often enough to be significant. 1-2 day completions do happen, but are scarce enough to become a pleasant surprise at best. There is at least one known instance of a vat (Phasmatys) taking well over 2 weeks to complete, but over-time batches are also fairly rare. 95% of all ale batches will finish within 7 days. On average, 2 (closer to 2-and-a-half) batches can be harvested per week (per vat) at a decent Cooking level.

For players wishing to collect as soon as possible, the best strategy is to check the vat every 12 to 18 hours, until the vat is ready. Ales will not be ready in less than this time under any circumstances. Checking the vat every 20 minutes, or every 4 hours, or at some regular interval less than 12 hours will simply waste the player's time, analogous to checking on a freshly planted Fruit Tree every 10 minutes to see if it has finished growing yet. If the player is lucky, their ale may be ready in as little as 12 hours, but will otherwise almost always take roughly 3 to 5 days. Players are best off checking their vats daily or twice daily, and not seriously expecting any result for 2 or more days.

This information has been compiled as part of the update history project. Some updates may not be included - see here for how to help out!
Retrieved from ‘https://runescape.wiki/w/Brewing?oldid=35683712’
Categories:
Hidden categories: