Breaking the Storm was a two-week community event which started on 24 June 2019. During the event, players could help build The Stormbreaker, a boat at the Varrock Dig Site for future use in travelling to the newly-discovered island of Anachronia.[1]

To get started, players spoke to Mr. Mordaut at the Digsite, which could also be accessed by interacting with any event noticeboard in Gielinor. While skilling, players could earn up to 500 extra boat materials at an accelerated rate in addition to the regular slower rate and receive double experience while gathering them. This limit was reset daily.

Logging in during the event prompted the message: Mr. Mordaut needs help building a ship that can breach the stormwall surrounding Fossil Island. Travel to the Varrock dig site to lend a hand. At the beginning of phase 4 of the event this was followed by The Breaking the Storm event will end on Tuesday 7th July at 23:59 server time. Make sure you claim your free Boost Brew[sic], and use any remaining Boost Brew's[sic] before the event closes!

While in the "Breaking the Storm" area, players earned 10% extra XP. This did affect all experience gains, not just those from the event activities. The base experience was doubled for the first 125 daily actions in the area.

Free-to-play players could only use the basic skills (Woodcutting, Smithing, Magic, and Crafting) whereas member players were able to use any skill. 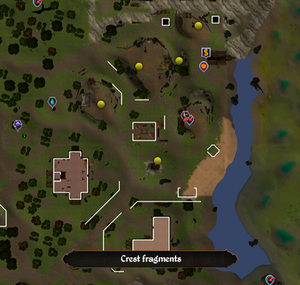 Map of the fragment locations

Players could speak to Mr. Mordaut at the Digsite to receive a special task. The task was to infuse the hull of the boat with powerful wards, which requires collecting fragments of a powerful ancient crest hidden across the site. Eva's alerter, a device for locating the fragments, can be obtained from Eva who can be found just north of Mr. Mordaut.

Players could interact with the Eva's alerter when they were in the vicinity of a buried fragment. This would reveal a hole that could be interacted with to dig up the fragment.

There were five different crest fragments to find around the Digsite.

Once all five fragments are collected, the player could combine them in their inventory and then talk to Mr. Mordaut with the resulting stormbreaker crest to complete the task.

Completing the special task rewarded the player with 500 boat materials and a tome of knowledge granting Magic experience.

Players could purchase boosts from the shop tab in the event interface.

Boat materials could be converted from a player's inventory or currency pouch into mystery boxes.