The breadbasket of Misthalin is a term used to refer to the southern agricultural regions of the human kingdom of Misthalin. The Breadbasket consists primarily of agricultural communities and has existed, in one form or another, since the early Fourth Age, during Misthalin's development.

The term is used only by Barricade Guards during the Learning the Ropes tutorial; however, the region has been identified similarly throughout Gielinorian history. The Breadbasket consists primarily of agricultural communities that rely primarily on farming and livestock to feed not only themselves, but also northern Misthalin and its neighbours.

Although the Breadbasket is a term usually only applied to Misthalin, the trend of southern agricultural development seems to have developed similarly in Asgarnia, where settlements and independent farmers help to feed the masses in the north.

The Breadbasket of Misthalin began to develop in the early Fourth Age, after the development of Avarrocka in the Year 700. For many years Avarrocka was the only sizable settlement in the unnamed region of Misthalin, feeding itself through farming and what minimal trade it could generate with nomads and isolated farmers outside the city. 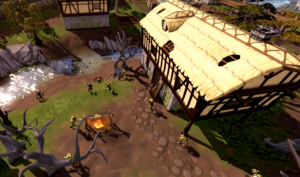 An example of a modern Misthalanian farming road in eastern Lumbridge.

Within several hundred years, Misthalin had become slightly more developed as small farming villages began to dot the nation. The hostility expressed by races such as goblins, hobgoblins, giants, and others limited the success of these settlements initially. Furthermore, the threat of Lord Lowerniel Vergidiyad Drakan and the Morytanian people of the east made expansion towards Silvarea and the former site of Saranthium limited. However, by the late Fourth Age much of Misthalin was dotted with isolated farming communities. In 1777, huge groups of Misthalanian farmers travelled beyond Paterdomus into Morytania, where they created the Lordship of the North Coast, Mort'ton, and Port Phasmatys. Much of Misthalin's farming would shift to here for several hundred years, although in the Year 23 of the Fifth Age the region rapidly deteriorated as Lord Drakan demanded blood tithes of the people.

As the late Fourth Age progressed, Misthalin's development saw a rapid surge as the River Lum became further settled by farmers. In 1937, King Claudius of Varrock sold Lumbridge Fort and its surrounding rural land to Polonius, a noble who demolished the wooden fort and built over it a more permanent stone castle. Seeking economic opportunities outside the crowded capital, many Misthalanians flocked to Lumbridge, where a farming centre rapidly began to develop. Soon after, a bridge was built over the River Lum, prompting increased trade with Al Kharid and the creation of settlements on northern Karamja in Musa Point and on the island of Entrana. In neighboring Asgarnia, Port Lina allowed farmers to trade their goods throughout the Southern Sea, although its success would pale to that of Port Sarim.

The Fifth Age and the discovery of runes saw a huge boost in farming capacity throughout the nation as it became increasingly possible for soldiers to defend the people with magic. Settlements such as Lumbridge and Draynor Village became hugely successful, while Varrock's the north's limited farming community generally immigrated south. Under this social situation, Misthalin became a leader in human progress throughout Gielinor.

The Runecrafting Crusades of 42 to 62 may have caused a brief depression in growth. The destruction of the Wizards' Tower in 70, however, cut off rune supplies and generally limited expansion against hostile races. However, by the present day, the Breadbasket has mostly re-developed, and Misthalin's economy has flourished.

The Breadbasket's borders are only roughly defined. The prominent bend in the River Lum south of Varrock, along with Draynor Manor, is often considered the region's northern border. Some agriculture does exist north of the Lum, although it is limited. Apart from Lumbridge and Draynor Village, the majority of farmers live independently, many near the road connecting the two communities.

It could be argued that the area south of Falador in Asgarnia is a continuation of the Breadbasket, as settlements like Rimmington are largely responsible for feeding the northern part of the region. Until the War of 164, however, much of northern Asgarnia was populated by farmers as well. After Lord Sulla's violent sweep of the area, the area never fully recovered.