The 'Rum'geon is a resource dungeon located on the volcano to the north of Braindeath Island, past a gate guarded by 50% Luke. The dungeon is unlocked during A Clockwork Syringe and it contains 'Rum'-pumped crabs and General Malpractitioners. Since the 'Rum'-pumped crabs can't be found anywhere else in the game, this is the only area in the game where players may obtain Brackish Blades.

A player requires level 50 Dungeoneering, completion of Pirate Pete section of Recipe for Disaster and A Clockwork Syringe to be able to access the 'Rum'geon. This resource dungeon is not mentioned in the in-game Dungeoneering guide.

Players will need a diving apparatus and fishbowl helmet to access this dungeon. Because of its underwater state, Dwarf Multicannons and Summoning familiars are not allowed into the dungeon.

When players die in this area during the quest A Clockwork Syringe, their gravestone and items appear outside at the dungeon entrance. However, after completion of the quest it will appear at the location of death, inside the dungeon.

Unlike for most other resource dungeons, Dungeoneering XP is not directly awarded upon entering for the first time. However, the player will receive 5,000 XP upon completion of the quest. 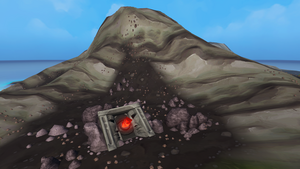