From the RuneScape Wiki, the wiki for all things RuneScape
Jump to: navigation, search
Brackish blade? (edit) 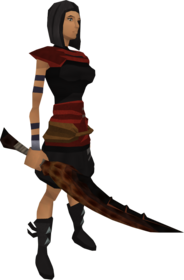 The brackish blade's special attack is 'Rum'ify. This attack costs 75% adrenaline to use, has double accuracy, and hits for 20-100% ability damage. Successful attacks will add 1.25% of the damage dealt to the wielder's Strength, Attack and Defence. For example if you hit 400, this means your Strength, Attack and Defence would all get a visible 5 level boost. The level boost caps at around 12 additional levels.