From the RuneScape Wiki, the wiki for all things RuneScape
Jump to: navigation, search
The Old School RuneScape Wiki also has an article on: osrsw:Boxing ring
Required materials: 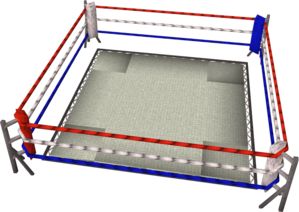 A boxing ring is a combat ring located in the Combat Room of a player-owned house. Players may use it to fight other players in a boxing match. The weapon choice in a boxing ring is between boxing gloves and unarmed fighting. Combat magic, armour, and jewellery are not allowed in the fight. However, the player may cast non-combat spells in the ring, but this only applies to a lunar spellbook, as all the Lunar spells relate to either non-combat or teleportation. A boxing ring may be used after a player has built a glove rack and has an opponent to play with.

The update history project is a work-in-progress – not all updates to this topic may be covered below. See here for how to help out!
Retrieved from ‘https://runescape.wiki/w/Boxing_ring?oldid=31973598’
Categories:
Hidden categories: