From the RuneScape Wiki, the wiki for all things RuneScape
Jump to: navigation, search
Bow (class 5)? (edit)

The bow bought as a reward looks like the class 5 bow, but has stats similar to those of a class 2 bow. 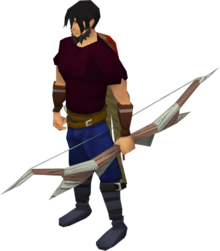