From the RuneScape Wiki, the wiki for all things RuneScape
< Bork
Jump to navigation Jump to search 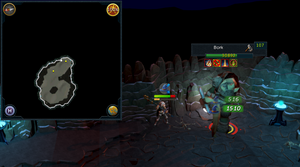 A safe spot for fighting Bork. 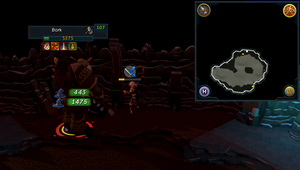 Bork's combat power is stronger than it shows (level 107). It is highly recommended to NOT face him without food or other means of restoration (even high level players). Players with level 80+ combat stats and gear will be able to kill Bork easily and take little damage.

Bork has moderate defence, although he is weak to crush weapons. He is immune to poison and stuns, and can hit up to 1368 with his melee attacks. While you are fighting Bork, Surok (during the miniquest) or a Dagon'hai Elite (afterwards) will attack you every 20 seconds with magic that has a 100% hit chance, and does around 500-600 damage (if not prayed/deflected against).

There are several safe spots for fighting Bork along various walls. If using ranged or magic, you can use Protect from Magic and avoid taking damage from the Dagon'hai Elite. Although, when the ork legions appear, you might temporarily switch to Protect from Melee or Protect from Range until you kill them. If you are using range, royal dragonhide should be worn and diamond bolts(e) should be the choice of ammunition.

When Bork is reduced to 22,500 life points, he will summon 3-6 level 86 Ork legions (in most cases 3), which will attack you using melee and ranged. (Three small orks form one ork legion. In a combat round you will only be attacked once per legion, not once per ork.) The Protect from Summoning prayer will not protect against them. For high-level players, the legions are not much of a threat, so these players can ignore them and focus on defeating Bork, although the ork legions are sometimes killed for the charms they drop at over 95% rate.

When Bork dies, Surok or the Dagon'hai Elite will teleport away, and the cave will start to collapse. Players who do not leave of their own accord after some time will be forced out of the cave. Surok is only in the room with Bork during the miniquest. However, the Dagon'hai Elite who is there afterwards is just as dangerous as Surok; his attacks have the same mechanics and do the same amount of damage.

If a player dies after defeating Bork, or is disconnected near the end of the fight and manages to defeat Bork during the disconnect time, the player's dropped items will be found in the Dagannoth chamber at the entrance portal to Bork's chamber. 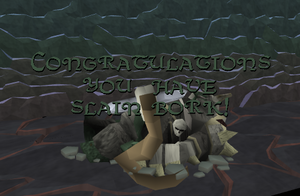 Bork is dead, and the player receives a congratulatory message.

He can only be fought once per day, dependent upon when you leave the fight. Trying to enter the portal to Bork's room twice in one day results in the message: 'The portal appears to have stopped working for now. Perhaps you should return later?'

One possible plan of battle therefore is to use the Protect from Melee prayer to defend against Bork, and bring high-healing food such as sharks. Piety or Turmoil is highly recommended. One with a high Defence level could bring high melee defence armour while praying against magic, as this is the only way to defend against Surok's magic attacks.

If a player stands where the portal is and does not move from that area, Surok or the Dagon'hai Elite may wander out of range at the beginning of the battle and will not attack with magic. Surok's attack range is the same as the player's range of sight on the screen. After Bork has summoned the ork legions, Surok or the Dagon'hai Elite may randomly wander again. Surok may move out of his attack range, or into it if he was out of range before. Players can also run south, and then west, north to trap the mage, ork legions and Bork. This keeps you immune, until the mage wanders out of the trap.

Probably the easiest way to kill Bork at level 80+ magic is the use of a polypore staff. Using extreme magic potions, Bork may die before the Dagon'hai Elite even has a chance to use their magic.

An easy, if expensive, technique is to use blood spells from the Ancient Magicks spellbook (requires Desert Treasure). You will not need any food if you pray against Melee. You can kill Bork at level 56 magic with only Blood Rush, and at 62 magic you can use Smoke Burst to damage Bork and the ork legions, and then switch back to Blood Rush to heal after Surok or the Dagon'hai Elite hits you. At level 68 magic the fight becomes incredibly easy as you can use Blood Burst to damage everything and keep yourself at full life points. If you use this method you will only need the necessary runes and 2 prayer potions.

Players should use the safespot mentioned in the above section. When Bork summons his legions, players should immediately switch their attention to the legions. As they are all grouped together, a player can recover massive amounts of health and they can get rid of the legions fast. Because of this, there is no need to worry about the Dagon'hai elite or Surok's magic attack whilst you pray against ranged. Once you defeat the legions in melee range, turn your attention to the legions closest to Bork (if any). Cast Blood Burst on the legions rather than Bork. If players cast Blood Burst on Bork instead, the legions may not take damage as Bork himself covers a 3X3 square. The player, by following this method, can finish off both the legions and Bork at the same time.

Finally, players should also note that it can take from 30 to 50 Blood Burst shots at level 70+ to kill Bork and his legions. This can cost from approximately 36k-60k worth of runes, but with a ring of wealth players can get 15k-20k worth of gems and other drops besides charms. So players can lose as little as 16k to as much as 45k per Bork trip.

Another cheap, yet effective way is the use of Fire Wave for players with a Magic level of 75+. Taking approximately 500 air runes and a lava battlestaff is enough. The tactic remains the same, pray against melee and heal after Surok Magis or the Dagon'hai Elite damages you. However you could also use a shield to heal from their magic attacks.

Note: If you die while attacking Bork, your gravestone and all your items will appear outside the portal where you can get it. You are encouraged to use the Edgeville route to get to your items faster.