Boric's Task III (miniquest) is Boric's third task as part of the Doric and Boric tasks.

Mining for the Guild[edit | edit source]

Boric will tell you that he has negotiated with the Mining Guild to provide supplies. However, they want a show of commitment first by proving the owners of the business are as happy to do the menial tasks as the workers. To do this Boric asks that you mine 15 orichalcite and 10 runite ore. The ore cannot be noted and you must have all 25 for it to work when you show it to Boric. It also must be done within the Mining Guild mine. The Mining Guild resource dungeon will also work. The Dungeoneering cape and skills necklace have direct teleports to the Mining Guild.

You will not receive a task list from Boric for this task. When you've obtained the correct amounts of both ores, your chatbox will read "You've gathered enough ore to satisfy the Mining Guild dwarves. Head back to Boric with the ore." Extra ore gained through Varrock armour does count. The buff gained from mining a Shooting Star does not count, nor does extra ore gained from levelling benefits. If you're using the Imcando pickaxe and it smelts the ore, it will still count towards the satisfaction of the Mining Guild; however, you still need 10 runite ores and 15 orichalcite ores to satisfy Boric. Stone spirits can be used to speed up the task.

Return with the ore to Boric. The ore must be in your inventory un-noted. Being in the ore box does not count. 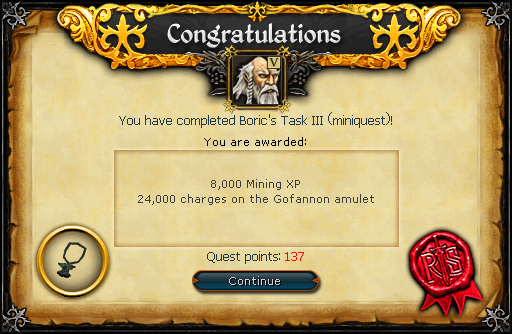