From the RuneScape Wiki, the wiki for all things RuneScape
Jump to: navigation, search
This article is about the miniquest. For the achievement, see Boric's Task II (achievement).

Boric's Task II is Boric's second task as part of the Doric and Boric tasks.

Having a brawl[edit | edit source] 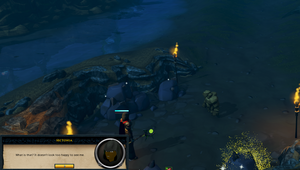 Boric will give you a mining sites note with a list of 5 mining sites to visit. Bring a weapon to defeat five level 1 creatures, then head to each location and clear each site of a living rock brawler. Attempt to mine any ore and a creature will spawn, kill it. The locations are:

It doesn't have to be the first attempt and you only have to kill one on each site. You may have to mine more than one rock at a site for the living rock brawler to appear. Mining a higher level rock increases the chance of spawning a creature. If no creature spawns after mining several ores, try another rock or logging out and in again. It will fix the issue, but you might have to kill some of the creature you had previously killed, a second time.

Once all five sites have been cleared, return to Boric for your reward.

Boric's Task II is directly required for the following quests/miniquests: