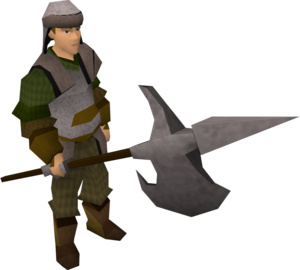 The Border Guards were non-attackable non-player characters who charged a player ten coins to cross the border between Al Kharid and Lumbridge. They wielded weapons similar to a steel halberd and at the time wereare the only free-to-play NPCs to wield halberds other than the fortress guards at the Black Knights' Fortress. They were removed with the Al Kharid graphical rework in September 2012, however border guards at the western and southern gates, who didn't share their toll functionality, remained in game.

On 17 September 2009, with the release of the starting area, two border guards were added to Draynor Village, Falador and Barbarian Village each. They let players pass for free, and players could not communicate with them. Any players with a total level of 59 or under would receive the following confirmation message on whether to pass through this gate or not, unless the account was three days or older: You are now leaving the starting area. Outside the starting area, things can get more dangerous and you won't be able to access the tutorials. With the exception of the Al Kharid and Varrock guards, they have all been removed with the release of The Bird and the Beast world event in December 2013.