Book (The Queen and the King)

From the RuneScape Wiki, the wiki for all things RuneScape
Jump to: navigation, search
Book? (edit) 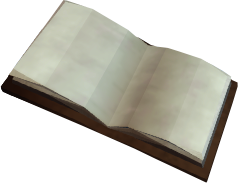 The Queen and the King is a book found south of the bonfire in the Yeti Town, next to Eliza. It is a children's story about Renmark. The book can be read but not picked up.

The following text is transcluded from Transcript:The Queen and the King.

A book for little yetis.

Long, long ago there was a world that was called Renmark. Renmark was a very funny world because whenever it changed season, all the people changed as well.

The same thing happened when spring turned to summer, when summer turned to autumn and when autumn turned back to winter. None of the people ever remembered changing.

One of the people who lived in winter was a beautiful queen called the Queen of Snow, whose name was Lumi. She lived in a wonderful castle made of ice and all through the winter she ruled wisely over her chilly minions, the snow imps.

One winter's day the Queen of Snow was exploring in the evergreen forest where she came across a poem written by the King of Roses. She didn't know who had written it, but the poem was so beautiful that she instantly fell in love with whoever it was.

She sent her snow imps out to search for the author but he was nowhere to be found in all of Renmark. When spring came, the snow imps became blossom fairies, forgot what the Queen of Snow had told them, and went about their merry business.

When next winter came, the Queen of Snow was sad not to have found the author. She wrote a letter herself and hid it amongst the trees, hoping the author would find it. The King of Roses found it, and wrote a letter in reply, to which the Queen in turn responded, and so on for many years.

So the Queen of Snow and the King of Roses fell in love, although they had never met, and neither realised they were the same person.

Then one day a visitor came to the world of Renmark. He was a mighty swordsman whose name was Guthix. Guthix had come to fight a monster which lived deep beneath the ground.

The monster, whose name was Mur, lived inside the world eating it from the inside out. When Guthix stabbed it with his sword, the monster was driven out, but the whole world exploded into pieces!

The four biggest pieces became the Land of Snow, the Land of Sunlight, the Land of Glades and the Land of Harvest. The explosion was so powerful that the person who was two kings and two queens was split into four different people!

So the Queen and the ex-King, whose name was Nick, were married, and lived forever after in the Land of Snow.
Retrieved from ‘https://runescape.wiki/w/Book_(The_Queen_and_the_King)?oldid=32890571’
Categories:
Hidden category: