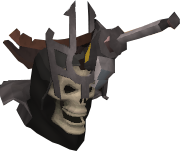 Bone Face is a Unholy Cursebearer Thok encounters during the Thok Your Block Off saga. He serves as the primary antagonist, where Thok gets his sword stuck in his skull. Thok follows him down the dungeons in search of his missing sword, until a final confrontation where Bone Face hides on top of a pillar while a gravecreeper named A face only his mum loves, a hobgoblin geomancer named Derek, and a gluttonous behemoth named Ate all the pies fight Thok.

After Thok defeats them, he takes the sword back out of Bone face's head, and the cursebearer promises to turn over a new leaf. Thok states that he will let the cursebearer live, as long as he doesn't see him again, but if he does, Thok will show him no mercy. Moments later, after Thok comes back from a dead end, true to his word, he pummels the cursebearer into oblivion.