From the RuneScape Wiki, the wiki for all things RuneScape
(Redirected from Bob the Jagex Cat)
Jump to: navigation, search
The Old School RuneScape Wiki also has an article on: osrsw:Bob (cat)
This article is about the cat. For other uses, see Bob (disambiguation).
Loading...
BobCollarless

Bob the Jagex Cat is an enigmatic black cat and reincarnation of the ancient hero Robert the Strong. He travels the world of Gielinor with his girlfriend Neite, although he generally returns to his human Unferth's house every week. Like all cats, his speech can only be understood through the use of the Amulet of Catspeak.

As Bob likes to wander the world, he has one of the largest wander radius of all NPCs in the game, spawning in his human Unferth's house in Burthorpe every time there is a system update, but after which he is able to wander anywhere that is not restricted by physical boundaries, being able to wander to far away places such as Varrock and Port Sarim. It is possible to locate Bob by using the amulet of catspeak (e) after it is enchanted in A Tail of Two Cats or the Cramulet (if combined with amulet of catspeak (e)) which, when operated, will open a menu that looks like a cat's face: Bob can be found in the direction that the white coloured dial is pointing. 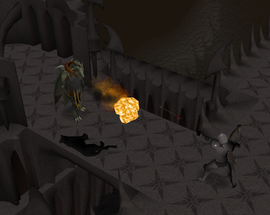 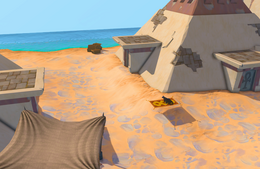 The wall on Kethsi that Bob's collar unlocks. 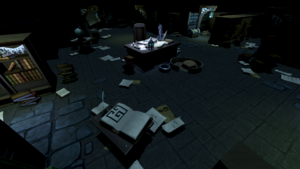 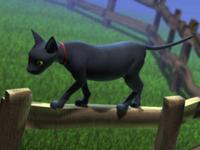