From the RuneScape Wiki, the wiki for all things RuneScape
(Redirected from BoB)
Jump to: navigation, search
"BOB" redirects here. For a list of non-player characters with this name, see Bob. 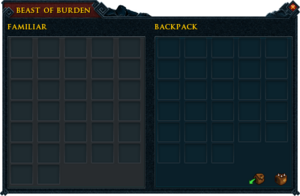 A Beast of Burden (often abbreviated to BoB) is a type of Summoning familiar that has the ability to carry items for the player. To access their familiar's inventory, players need only to click on them or interact with them and manually ask them to open their inventory. The familiars with this ability are shown in the table below. 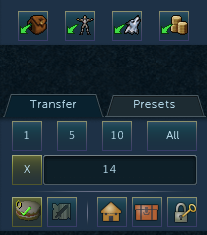 There is also a give-all option, which deposits all inventory items, prioritized according to their order in the inventory, into the familiar's inventory.

For the production skills of Smithing, Crafting, Herblore, Divination, and Cooking, the production action brings up a "Make-X" interface. By default, this interface allows the player to press "Space" to create the "maximum possible" number of items possible before certain item-saving effects. For example, 15 unfinished potions and 13 secondaries gives the option to make 13, even though it is very common to be able to make more than 13 with the scroll of cleansing.

This information has been compiled as part of the update history project. Some updates may not be included - see here for how to help out!
Retrieved from ‘https://runescape.wiki/w/Beast_of_Burden?oldid=35510753’
Categories:
Hidden categories: