A blurite sword is a weapon unlocked during The Knight's Sword. During the quest players make one by giving two iron bars and a blurite ore to Thurgo the Imcando dwarf. After the quest, they can make one by smithing one blurite bar, granting 40 Smithing experience. Its stats are identical to the iron scimitar.

If players talk to the Wise Old Man whether they should keep the blurite sword or not, he will say that it is "fairly nice," and "a decent weapon," but will also comment that players don't really need it and it would only be special to Sir Vyvin himself. He will then offer to buy it for six coins. 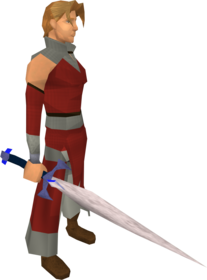