Blue partyhats are a discontinued item that came from opening Christmas crackers, which were obtained in the 2001 Christmas event. They can no longer be obtained except for being traded from another player that already has one.

Partyhats are some of the oldest discontinued holiday items in the game, beaten only by the pumpkin. In combination with being a wearable item, this has resulted in them becoming some of the most expensive items in RuneScape's history, far exceeding the maximum cash value and resulting in them being traded almost exclusively outside the Grand Exchange. When free trade was reintroduced this caused partyhats to give the appearance of rising sharply in value.

During the 15 Days of Christmas in 2013, this item, along with other Christmas-themed equipment, were given the Hybrid style of combat, and stats that scaled with the player's levels. This was so players could use these items in combat to assist in hunting for festive crackers during the event. 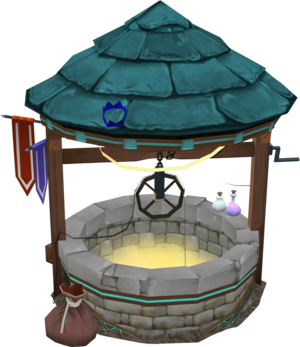 A blue partyhat on the roof of the Well of Goodwill.
Retrieved from ‘https://runescape.wiki/w/Blue_partyhat?oldid=35680315’
Categories:
Hidden categories: