From the RuneScape Wiki, the wiki for all things RuneScape
(Redirected from Bloodwood trees)
Jump to navigation Jump to search
"Bloodwood" redirects here. For the herb, see Bloodweed.
For other uses, see Bloodwood tree (disambiguation).
Bloodwood tree? (edit)? (edit) 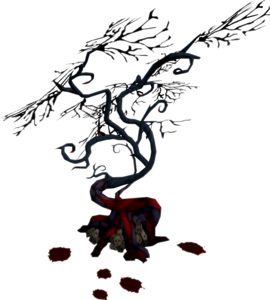 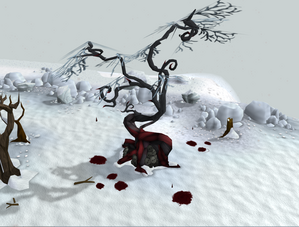 The bloodwood tree is a tree that grows only in places of prominent bloodshed and violence, being some of the rarest trees to be found on Gielinor. The tree provides bloodwood logs, used in making bakriminel bolts. In order to chop the tree, players must have level 85 Woodcutting, and in order to fletch the logs into bolt shafts, players must have level 93 Fletching. These may be boosted, and players can be assisted in making the bolts. The logs and shafts cannot be taken too far from the tree, or they will turn into dust.

If the player attempts to chop a bloodwood tree without any bakriminel bolt tips, a game prompt will appear reminding them that the accumulated logs and/or bolt shafts will crumble without them. The player may then decide whether or not to resume cutting the tree down, or leave and return to get the bolt tips.

Without any modifiers, bloodwood trees provide very few logs, with non-wilderness having a minimum of one and usually give around 1-5 logs on average. Wilderness trees are slightly stronger, indicated with the message This tree is more robust than most and refuses to be felled just yet.. These trees have a minimum of one log, with an average of 5-7 per tree. The deeper the bloodwood trees are in the Wilderness, the more logs they'll yield.

Having a high-quality hatchet with the Honed and Refined perks, along with the Lumberjack aura and Nature's sentinel outfit can increase the amount of logs gained from the tree.[1] Burning bloodweed incense sticks gives a chance of doubling a bloodwood log, up to 10%. With all of these bonuses, it is possible to gain in excess over 100 logs per tree in the Wilderness.

The Fletching cape can also rarely increase the number of bolts produced. Equipping a Sana's fyrtorch will provide a chance of receiving an extra log.

Temporary buffs that directly affect the Woodcutting level, such as the Gatherer skills boost from an advanced pulse core, can also significantly boost the number of logs obtainable. However, a perfect juju woodcutting potion does not increase yield from bloodwood trees.

Upon being cut down, there is a six hour waiting period before the tree regrows. Bloodwood trees, similar to Farming trees, are instanced for the player to chop. However, they are not world-instanced, so once a tree is felled, the tree on that location for all worlds is cut down.