From the RuneScape Wiki, the wiki for all things RuneScape
Jump to: navigation, search
The Old School RuneScape Wiki also has an article on: osrsw:Blood Blamish Snail 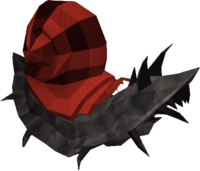 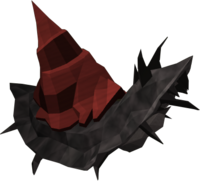 A chisel can be used on the dropped shell to make a blood'n'tar snelm which gains the player 30 crafting XP. This is the same for all Snelms. They also provide bonus protection against Mort Myre snail attacks. 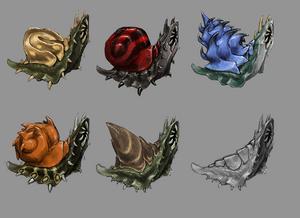 A pointed blood blamish snail (which drop the pointed blamish red shell) can be found near the BKR fairy ring (usually slightly north-east). Another could be found in the dead-end area between The Hollows and Mort'ton, but this takes much longer to reach.

A round blood blamish snail (which drops the round blamish red shell) is found south of the Werewolf Agility Course entrance, among the green salamanders. It can be reached by teleporting to the Canifis lodestone, running south and slightly east.

Another pointed snail and two round snails can be found in the area around the entrance of the first Myreque Hideout, only accessible through the rope bridge north of The Hollows.

Both types of blood blamish snails can be encountered in the campsite event of the Temple Trekking minigame. One or more blood blamish snails are frequently, although not always, present at each occurrence of the campsite event. The snails can be killed in this event for their shells, and their meat, which is convenient for feeding the five people who appear during the event to prevent them from turning into ghasts.

The update history project is a work-in-progress – not all updates to this topic may be covered below. See here for how to help out!
Retrieved from ‘https://runescape.wiki/w/Blood_Blamish_Snail?oldid=35393640’
Categories:
Hidden categories: