Blisterwood polearms, Blisterwood Sickles, Sunspears and Ivandis flails are the only melee type weapons that can kill the vyrewatch, Vyrelords or ladies, and Vanstrom Klause. These weapons are also more effective against other types of vampyres, like vampyre Juvinates, but these creatures are already at such a low level once blisterwood weapons are unlocked, that killing them isn't worth anything.

The stats are considerably better than the basic Ivandis flail, as it hits both harder and more often than the flail does. On the flip side, the polearm has a shorter reach than the flail and deals crush damage rather than slash, but this doesn't seem to make much of a difference as there are currently no vyrewatch weak to either slashing or crushing weapons (though the juvinates encountered in Temple Trekking are weak against slash).

Though it's meant to be used against the vyrewatch, it is still a rather effective weapon in PvP and PvM situations for those who cannot afford more expensive weapons, equivalent to Barrows melee weapons, and almost matching that of a godsword. 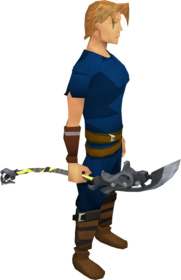