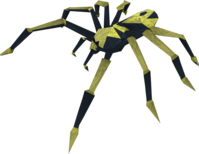 The blessed spider is a type of spider found only in the quest area of Underground Pass. They are believed to be blessed or "converted" to Iban. Like most spiders, blessed spiders attack with ranged and are weak to crush.

A larger version of the spider is found in a canyon on the bottom floor and is known as Kalrag. They are found on the west side of bridge and in the pit where Kalrag is located.

They are a strong monster with a low level, hitting a maximum of 120, it is a good idea to bring food and good armour since there are multiple spiders in the given areas.

Blessed spiders are not aggressive. However, if Kalrag is killed, they become aggressive to all levels of players. When Kalrag respawns, they revert to being non-aggressive, except for any that might be attempting to attack the player already. Blessed spiders are often feared for lower levels that are doing quests associated with the Underground Pass.

The update history project is a work-in-progress – not all updates to this topic may be covered below. See here for how to help out!
Retrieved from ‘https://runescape.wiki/w/Blessed_spider?oldid=33465549’
Categories:
Hidden categories: