He is the beacon keeper located near the River Salve, on Silvarea.

He is a witness of the suspect in Missing, Presumed Death.

As with some (or all) of the beacon keepers, Blaze has an impulse to deliberately start fires. This behaviour is called pyromania. He becomes quite crazed when he is talking about lighting fire, and this is shown then his animation changes to a wide-eyed expression and he usually screams something about fire, his chathead takes on a unique, deranged appearance.

Blaze assists an adventurer with a murder investigation in Missing, Presumed Death. 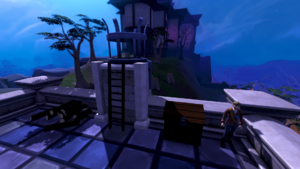 Blaze standing by his beacon.

This information has been compiled as part of the update history project. Some updates may not be included - see here for how to help out!
Retrieved from ‘https://runescape.wiki/w/Blaze_Sharpeye?oldid=35730636’
Categories:
Hidden categories: