From the RuneScape Wiki, the wiki for all things RuneScape
Jump to: navigation, search
The Old School RuneScape Wiki also has an article on: osrsw:Black unicorn Foal 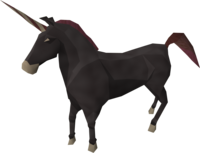 Like their elders, Black unicorn Foals are pure evil. They were once unicorns, some of the holiest and most respected creatures in all of RuneScape. Somehow, these creatures were tainted and have become mere shadows of their former selves. How this happened is unknown, but some speculate that they are some of the last remnants of the God Wars.

Black unicorn Foals, unlike their parents, rarely drop unicorn horns, an important ingredient when making antipoison potions using the herblore skill. Because of this, they are very rarely killed and are generally ignored.

Black unicorn Foals can be found wandering east of Rellekka near the entrance to the dwarven city of Keldagrim, and also right by the drop off point of the Wilderness Lodestone. They also drop Green charms which can be great for low-levelled players.