Black stone (Ritual of the Mahjarrat)

From the RuneScape Wiki, the wiki for all things RuneScape
Jump to navigation Jump to search
Black stoneBlack stone (smashed)? (edit)? (edit) 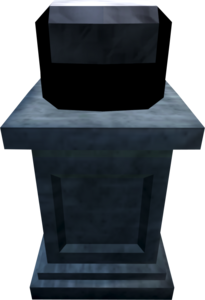 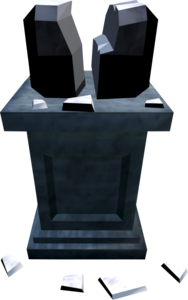 The black stone is an object located in Zemouregal's fort in The North during the quest Ritual of the Mahjarrat. Another version of the stone is located in New Varrock Castle during Dimension of Disaster: Defender of Varrock. It is a magical item created by Zemouregal using a rare black mineral that he believed was obsidian, which he found in the Karamja Volcano.[1]

According to Zemouregal in his Heart magic notes, it will give him the ability to have greater control over the undead hero Arrav's heart, making him less likely to resist Zemouregal's powers.[2]

During the quest, the player infiltrates the fort and smashes the stone, allowing Arrav to be swayed when he comes into contact with his heart.

The black stone would later be given to Guildmaster Tony by Xephos, a mysterious stranger. Xephos suggested that Tony use it on the Mysterious monolith. Upon doing so, Tony was sucked into the monolith.

During Azzanadra's Quest, Azzanadra reveals that the material used to created the stone was not obsidian and that Zemouregal was mistaken in his belief that it was, although Zemouregal was unaware of this. Azzanadra also said that whatever substance that had corrupted Mah's egg in the previous revision had the same "magical residue/smell" as this black stone.[3] It is implied that this black stone is the same substance as the black stone used by The Ambassador as well as the black stone used to create the Black Stone Dragon, linking it to Xau-Tak.