From the RuneScape Wiki, the wiki for all things RuneScape
Jump to navigation Jump to search
For the current account offence system, see Account Status. 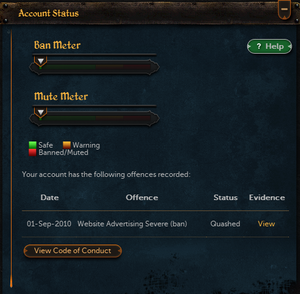 The risk of getting banned or muted could be seen on these 'Pillars'.

An image prior to the offence system update. The number of black marks associated with an account ranged from 0 to 10.

Black marks were a disciplinary measure used by Jagex to track the offences of a player. When a player had accumulated 10 black marks, the player could be permanently muted or permanently banned.

Minor black marks that left players in the "Green zone" were removed after a designated period of time, and could not be appealed. Players could track the number of black marks on their account by clicking "Appeal an Offence/Ban" in the account recovery section of the website, though they couldn't appeal a Legacy punishment.

Mod Raven (a Jagex Moderator) created an "Account Review Thread" in the RuneScape Forums on 10 October 2008, which allowed players that have permanently banned or muted accounts to be reviewed once more. Many accounts had offences removed, but more serious offences such as RWT offences (rule 12) were not removed. The thread has since been closed, and Mod Raven states that it "will not be re-opened for several weeks, if at all". The thread was re-opened as of 9 February 2009. However, appeals for account bans that have been submitted may yet be accepted, since there is "an enormous backlog of several thousand names", and "it may still be a good few weeks until this backlog is resolved."

On the 11 May 2009, the blackmark system was replaced by a new offence system.[1] The rules were split up into three categories: Honour, Respect and Security. All players had the option to appeal past offences once more. Most offences will now expire after 12 months. Serious offences such as RWT were not removed and player's accounts remained banned.