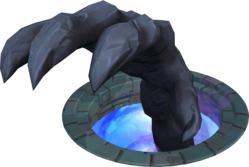 Rabid Jack describes the hand as belonging to an ancient and powerful entity, implied to be Xau-Tak. During the fight with Rabid Jack at Ulthven Kreath, the black hand will occasionally target and attempt to strike the player. If struck by the black hand, the player will be dealt 5,000 - 10,000 damage. After the defeat of Rabid Jack, the black hand is sealed away after the portal is blocked with a large stone structure.

In the Temple of Aminishi, it appears from a black portal whenever Seiryu's health is depleted and the black crystals on his back become attackable. The hand creates shadow enigmas, which heal the crystals on Seiryu's back if they are able to reach him.

Four of these hands appear in the fight against the black stone dragon when she reaches 520,000 health and must be destroyed in order to progress the fight. They attack with melee, however, they occasionally beckon the black stone dragon to imbue it with energy, launching a powerful magic attack and sending shadow hands towards nearby players.

Twelve of these hands are summoned by Kranon when he reaches 400,000 health to subdue Seiryu. One of these twelve hands also attempts to heal Kranon by sending white orbs that heal 2,500 damage each. Standing between them converts it into a black orb which damages the player. The active hands rotate clockwise after sending three orbs.