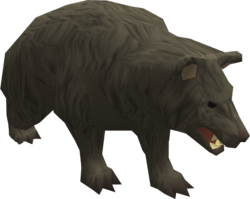 Black bears can be found in forests in RuneScape. A single black bear can be found south of the south-east Varrock mining site, along with two unicorns. They can also be found between the Goblin Village and the dwarf encampment (below the Mind Altar ruins). More remote locations to find black bears include in the lower-levelled Wilderness and on Entrana, although weapons and armour may not be taken to the latter to combat them.

Their fur can be sold to a fur trader (located in Varrock, Ardougne, and Rellekka). The meat can be cooked by itself or used as an ingredient in wild pie.

They can be killed for bear assignments.