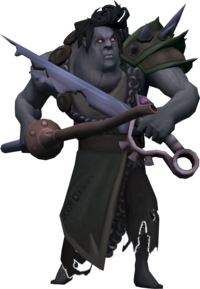 The graphically reworked Black Knight Titan is the final boss of Gower Quest. He killed the cabbagemancer that was maintaining the life altar so he could lure the Player character there and steal their disk of returning. He wished to use the player's disk of returning to go to Gielinor and replace his graphically outdated counterpart.

His maximum life points are scaled to be equal to a player's own without the use of boosts, meaning he can have up to 9900 life points. His life points must be reduced to zero 6 times in order to defeat him. He starts off attacking with just his sword, then his lance, and finally both at the same time. He drops nothing.