The Black Arm Gang are the arch rivals of the Phoenix Gang and are currently at war with them. It is led by Katrine Raven. The gang itself has one side of the Shield of Arrav.

The location of the hideout

This gang is greatly involved with Shield of Arrav and Heroes' Quest quests. The main base of the gang is in Varrock, but they also have another in Brimhaven.

Players join this gang during Shield of Arrav after giving Katrine two Phoenix crossbows. It is possible to swap between this gang and the Phoenix Gang by speaking to Katrine and Straven respectively.

Their counterpart in New Varrock have continued their rivalry with the counterparts of the Phoenix Gang, stealing the phoenix mascot of their rivals. 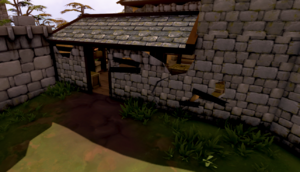 The entrance to the hideout of the notorious Black Arm Gang. 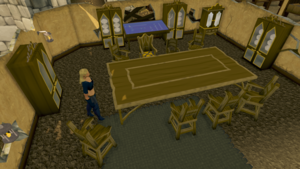 The well-furnished (and probably stolen) interior of the Black Arm Gang's headquarters.