Birth by Fire, also known as The Fallen Nihil, was a time-limited event held in the Lumbridge Crater, released on 8 November 2016 and removed on 27 November 2016. Within this event, the player gathered burning embers for the Fallen Nihil, an entity who emerged from a bonfire held in the Lumbridge Crater, at the conclusion of the Celebration of Fire Treasure Hunter promotion.

The event premiered on 00:00 UTC 8 November 2016 with an in-game announcement stating that

The Fallen Nihil has stepped out of the Lumbridge Bonfire and is requesting your help! See the Events tab under Community for more info.

Each day that the player logged in during the event, they would be greeted with one of the following announcements:

Players could gather burning embers by training any skill or killing monsters throughout the duration of the event. The embers could also be obtained as a reward for turning in completed daily challenges.

For an expedited rate of gathering burning embers, it was advisable to train either Firemaking or Cooking at the bonfire in the Lumbridge Crater. These skills presented a modifier (extending from 20% to 50%) to the number of burning embers awarded while training.

As a reward for their participation in this event, players could exchange their burning embers for pieces of the Fallen Nihil outfit, in addition to event mystery boxes.

The player received a reward for each of the following milestones:

Players could also receive a selection of these standard rewards: 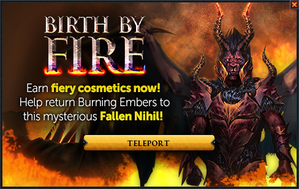 The popup when checking the event noticeboard
Retrieved from ‘https://runescape.wiki/w/Birth_by_Fire?oldid=35767029’
Categories:
Hidden category: