Biohazard is the second quest in the elf quest series. The quests plot deepens as Elena finally gets a chance to process her plague samples. Buried under these samples, lies a well-hidden secret.

This is the second part of an ongoing adventure. Help Elena discover the truth about the infamous Ardougne plague.

The starting point of the Biohazard quest is in East Ardougne.

To start the quest, the player must talk to Elena in East Ardougne, in the house north-east of the north-western pub. She will tell the player that she was able to collect some good samples of the plague, but unfortunately the mourners took all of her equipment, which included a distillator, and have kept it at their headquarters.

She now needs someone to sneak back into the city and try to find it for her. Since the sewer tunnel used in the previous quest has been sealed off from the other side, she suggests you talk to her father's friend, Jerico, who keeps communication through West Ardougne with the use of his pigeons.

Jerico lives in a house just south of the northern bank in Ardougne and two buildings north of the chapel. He will tell you that he has arranged for Omart to help create a rope ladder to get over the wall between the cities. Search the cupboard inside his house to find some bird feed and grab a pigeon cage from the backyard.

Omart can be found west of Ceril Carnillean's house in East Ardougne, south of the Ardougne castle. When you talk to him, he says that although he can move you over the wall, it is too risky as the watchtower guards are too close to the wall. The guards need to be distracted so that you can find an opportunity to enter the city. He will tell you to talk to Jerico who will tell you that the birds are out back and that bird feed can be found in the cupboard. However, you do not need to return to Jerico if you already have the bird feed and pigeon cage. 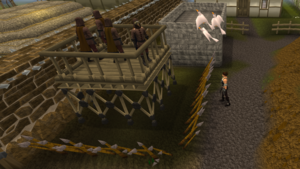 Now head to the watchtower, directly north of Omart. Stand in the corner where the two spiked fences meet and use the bird feed on the watchtower fence. Once the feed is used, click to open the pigeon cage to release the pigeons. They will immediately fly into the tower to eat the bird feed, and successfully distract the guards.

While the guards are distracted, go back south and talk to Omart, who will call out to his assistant, Kilron, to throw over the rope ladder. Climb over the ladder into West Ardougne. 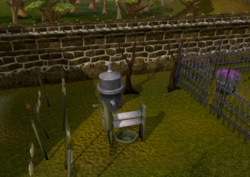 The respawn spot of the rotten apple that needs to be placed in the cauldron.

Head to the Mourners' Headquarters located in the north-eastern corner of the city. Try to enter, but you will be turned away by mourners. Go around the headquarters to the northern part, where you can see a cauldron being cooked in the backyard. Pick up the rotten apple laying on the ground just to the west, and squeeze through a gap in the fence into the backyard.

Right-click and use the rotten apple on the stew that is brewing in the cauldron. Squeeze back through the fence and walk around to the front of the building, and attempt to go inside again. One of the mourners will tell you that the player is not permitted inside because several mourners are ill with food poisoning, and are waiting for a doctor.

Head to Nurse Sarah's abode – the building with multiple bunk beds located south-west of the West Ardougne church and next to the wall. Search the box at the north side to obtain a doctors' gown. Equip the gown and go back to the headquarters. The professional attire will easily fool the mourners into letting you into their base. For all subsequent visits to the headquarters during the quest, the gown must be worn at all times.

Go upstairs and kill a mourner, while still wearing the doctor's gown. A key will automatically be placed in the player's inventory. Skillers and 10 Constitution pures should note that a cannon will not work here, but a ring of recoil can be used to deal all of the damage; ensure auto-retaliate is off, and simply talk to the mourner. Whichever dialogue option you choose, the mourner will discover you're a fraud, attacking you; you do not need to deal any damage through combat to receive the key.

Once you've obtained the key, use it on the gate to get inside the caged room. Search the crates to find Elena's distillator.

Exit the headquarters and head back to Kilron at the south-east corner of West Ardougne. He will help the player get back over into East Ardougne. Alternatively, players can use the lodestone, or head through the sewers as they are no longer blocked. Go to Elena and give her the distillator.

Elena will extract a sample of the plague, but the results of her test are strange. In order to get refined results, she needs more help. Elena will tell you to meet with her guide, Guidor (talk to chemist first), in Varrock with the plague sample, along with some liquid honey, sulphuric broline, ethenea and some touch paper from the chemist in Rimmington. You must have the plague sample in your inventory for the chemist to give you the touch paper.

If any of the samples break, players can get them replaced by talking to Elena. It might be wise to use the drop trick to get a second set from Elena. The extra set can be banked, preventing the need for a trip back to Ardougne in case of an accident.

The plague sample is extremely fragile. Use of any of the following will cause the sample to break:

Use of any of the following will not cause the sample to break:

Some of the methods that can be used to transport the materials are:

Ask the chemist if he has any ideas on how to get the samples past the guards in Varrock. He will suggest giving a vial to each of his three helpers: Chancy, Da Vinci, and Hops. They are located right outside the chemist's house crowding around a fire.

Make sure to give the bottles to the right people or you will have to go back to Elena. Give Chancy the liquid honey, Da Vinci the ethenea, and Hops the sulphuric broline. Once you have given the vials, they will tell you to meet at the Dancing Donkey Inn in Varrock.

So far, so good[edit | edit source]

The samples and paper need to be taken to Elena's mentor, Guidor, in Varrock.

Once again, do not teleport to Varrock by any method possible, as the plague sample will break and you will have to get a new one. Again, you can bank the items, teleport, take the items from the bank, and then proceed through the rest of the quest.

You must however, give the vials to the three in front of the chemists' house before proceeding, as you won't be able to gain entry to the caged-off area while in possession of them. To avoid needing to leave this area bring your priest gown and robe before entering. They can be bought at Thessalia's Fine Clothes in Varrock Centre for a total of 10 coins, if you haven't already got them.

Next, go to the south-east part of Varrock with the plague sample and touch paper to the guarded gate. Try to use the gate; the guard will search you, but he won't find anything conclusive and will allow you to pass. Head to the Dancing Donkey Inn (marked with a

on the minimap) and talk to the chemist's assistants to get the vials back. Your inventory must have space for the three vials. Having a full inventory will require you to obtain a new set from Elena.

Head to Guidor's house in the south-east corner of the gated area. When attempting to enter the bedroom, Guidor's wife will say that she is waiting for a priest to come and bless Guidor. If you hadn't bought them beforehand, you can purchase the priest gown and robes at the Fancy Clothes Store just north of Guidor's house. Equip your priest gown and she will let you in. Talk to Guidor, who says that his wife has kept him under house arrest because of the rumour about the 'plague-carrier'. Give him the vials and sample and tell him that Elena has sent a sample that needs to be processed. After analysing it, he will come to a surprising conclusion. He tells you that the plague is just a lie and the real question is why. As the samples have now been used, you can carry on using the teleports mentioned previously.

Return to Ardougne and talk to Elena. When you tell her that Guidor found nothing in his results, she suggests that this must be a hoax and that you should speak to the person on top of this – King Lathas. The king is located in his bedroom on the 1st floor[UK]2nd floor[US] of the Ardougne castle, just south of Elena's house.

When told that the plague is in fact a hoax, the king replies that he did it for the best of his people, and that it protects them from a "far greater danger". He then tells the player about the journey of King Tyras – the King of West Ardougne and King Lathas's brother – towards the west and that he has been corrupted by drinking from the Chalice of Eternity. Hence, the wall has been erected between the cities to protect East Ardougne and in turn, all of Gielinor. 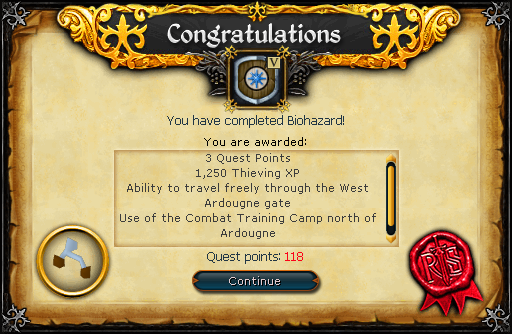 Biohazard is directly required for the following quests/miniquests: