From the RuneScape Wiki, the wiki for all things RuneScape
Jump to navigation Jump to search
This article is about the item in the King of the Dwarves. For the troll, see Big Rock (NPC). For the 20th Anniversary celebrations item, see Big rock (20th Anniversary).
Item JSON: {"edible":"no","disassembly":"no","stackable":"no","stacksinbank":"yes","death":"never","name":"Big rock","bankable":"yes","gemw":false,"equipable":"no","members":"yes","id":"20091","release_date":"4 January 2011","restriction":"surface","release_update_post":"King of the Dwarves","lendable":"no","destroy":"You can get another from the troll settlement near Keldagrim.","highalch":false,"weight":32,"lowalch":false,"tradeable":"no","examine":"A big rock.","noteable":"no"}

The big rock is a rock that must be lifted during the King of the Dwarves quest. Players need 77 Strength in order to lift the rock for the quest. However, if the player has 90 Strength, it will be kept in the player's inventory as a quest reward. Boosts cannot be used to obtain this item. Those who do not have 90 Strength can come back to collect it any time later once 90 Strength is achieved.

"Big rock" comes with a 'Lift' emote in which the player picks up the rock and drops it. To do the 'lift' emote, you need one space in front of you. However, you can still do the emote with players and NPCs standing in front of you. You don't need one space behind you, but in the emote, you go back after taking the stone up, giving the ability to clip into scenery such as stairs. 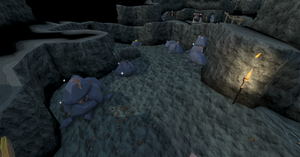 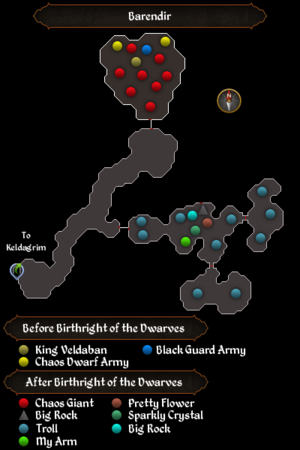 To claim this item, players need to return to the troll settlement in the Barendir cave network. To get there, first head to the southern most entrance of Keldagrim. Just to the east of the entrance is the Keldagrim south-east mine. Along the east wall in the mine is the entrance to the Barendir cave network. Go in and then head northeast to the next cave entrance located along the east wall. Once in the troll settlement, the big rock is located on a pedestal in the centre of the room.