From the RuneScape Wiki, the wiki for all things RuneScape
< Big Game Hunter
Jump to: navigation, search

There are many optimisation tricks to Big Game Hunter that can allow you to complete encounters swiftly without being caught.

The following are useful, but certainly not necessary. 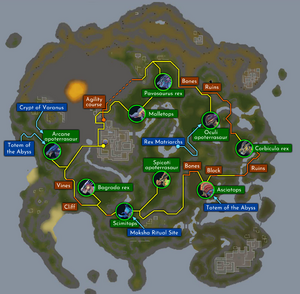 Most dinosaur arenas are easily reached by navigating the Anachronia Agility Course from base camp (which can be reached via Home Teleport to the lodestone).

The tier 1 dinosaurs are fairly easy to access; walk west from the lodestone to reach the Arcane apoterrasaur, and then the Bagrada rex and Scimitops can be reached by navigating through the agility course.

The tier 2 dinosaurs are somewhat harder to access without a Totem of the Abyss; however, with one planted in the southeastern location, the player can immediately access the asciatops habitat and then navigate the nearby obstacles to make their way to the spicati apoterrasaur and corbicula rex habitats. Alternatively, if climbing from the tier 1 dinosaurs, players can simply access the spicati apoterrasaur by running northeast of the scimitops. Only the corbicula rex will have difficulty reaching to, being significantly farther away from the other dinosaurs of its tier.

The tier 3 dinosaurs are perhaps the easiest of the three sets to access; the malletops habitat is immediately accessible by exiting through the base camp's northern entrance. Players can then either go north to the pavosaurus rex or east to the oculi apoterrasaur habitats. There is no need to use the agility course to quickly reach these dinosaurs' habitats.

At the beginning of an encounter, the priority should be to collect vines and logs. Ordinarily, it takes 7 logs and 3 vines to kill one dinosaur. However, there are two additional factors to consider. First, at the start of a series of encounters, the dinosaur's weakness is unknown, and it may take 2 or more extra logs to determine the weakness. Second, the pressure plate does not need to be rebuilt after a kill when there are multiple dinosaurs in a single encounter, nor do scorpions that survive firing. Try to gather all resources needed before constructing anything, as you'll keep all unused resources if caught. In a particularly difficult situation or bad pattern, consider deliberately stopping to play it safe.

Extra resources gathered in one encounter can be used in the next, if the instance is not left. It is recommended to stockpile, with the first encounter being used as a preparation of sorts to determine the poison. The player's inventory should be optimised so that they can kill two dinosaurs each time (8 logs and 6 vines); at the start of the encounter, players should make at least 15 shafts, making more only if necessary.

There is typically a minimum of 5 encounters per habitat (double and triple counts as one), although up to seven encounters may happen per habitat. With optimal gear and no mistakes, each habitat should be cleared within 20 minutes of starting, regardless of the amount of dinosaurs encountered.

At the start of a series of encounters, one must work out which type of poison to use. The strategy depends on whether the player has a tier 3 hunter lodge unlocked or not.

There are three types of frogs in the encounter - golden, sky-blue, and phantasmal frogs. Depending on the dinosaur being hunted, there are a minimum of six frogs, and a maximum of eight frogs of each type. Most of these frogs are generally wander around a localised area, although one or two frogs are generally mixed with the other groups. In order to harvest poison from the frogs, a spear shaft must be prepared. Extracting poison from the frogs yields Herblore experience, and the frogs replenish their poison after two minutes.

If all three colours of frogs are in the encounter, create two spears of the same poison type and one spear of a different poison type. Load them into the scorpions and load the bait. The cutscene shows coloured hitsplats to see how much damage each colour of poison deals. Regardless of poison used, each colour of spear will deal 1 of 3 amounts of damage: 7,500, 15,000, and 30,000. Thus it is possible to figure out which poison does the most damage by either watching the cutscene to see the damage from each of the coloured hitsplats - which directly relate to the colour of poison used, or read the chat message related to the damage dealt (coloured text will denote the damage that each colour of spear did). The player can determine which of the 3 poison types will deal the most damage based on this. Then, either 1 or 2 more poisoned spears will be required to kill the dinosaur. This allows for an initial spear requirement of either 4 or 5 to determine the poison type that deals the most damage, which will be constant for the remainder of that instance (including multiple dinosaur encounters).

If a frog repellent is used, one of the less effective frogs is automatically removed when the player is in the encounter. A second one may be used to leave the most effective frog on the hunting grounds. Frog repellent should only be used for tier 3 dinosaurs, along with any double or triple first encounters regardless of dinosaur tier.

A tier 3 hunter lodge will automatically remove one of these less effective frogs, which stacks with the frog repellent, saving 10 hunter marks each time if they were to be used.

If you have 3 types of frogs in the encounter then tip 1 spear from one type of frog and a second spear from another type, and arm two scorpions, then follow remaining steps.

It is a good idea to become familiar with the movement patterns. It can be helpful to sit and observe a dinosaur for a while, particularly to work out if a specific point around the edge of the arena is safe. In some cases, whether or not a space is safe may depend on the dinosaur's pattern.

The centre of the encounter, near the pressure plate, is often the safest place to be if there is only one dinosaur, depending on its movement pattern. From the centre, try to follow the dinosaur's movement, tailing it as it moves around clockwise or anti-clockwise. This method can be used to build and load the scorpions while following the dinosaur. While gathering logs and vines by the side and collecting frog poison, make use of tall grass to escape detection. One can safely fletch spears while in tall grass.

When caught in an area of detection, never run in the same direction as the dinosaur as they move at the player's running speed. Try to run against the direction of the dinosaur. Make use of the Surge / Bladed dive abilities to move quickly out of harm's way. Having equipment with the Mobile invention perk is very helpful. Certain spots on the edge of the encounter may allow the player to stand safely if the dinosaur's detection radius and the spot in question do not overlap long enough for the dinosaur to detect and catch the player. A Prism of Salvation can be placed in a safe spot to quickly escape detection.

Immediately after placing the bait (while the screen is fading to black), the dinosaur's vision ring can safely go red to the point where it would normally spot the player and it will not end the encounter. This can be used to the players advantage if a dinosaur is coming near, but should not be relied upon too heavily as the player can be stunned if walked on and this will pause the baiting animation.

If the dinosaur catches the player, then a cutscene will ensue where they will roar, causing the player to flee before the dinosaur flees itself, destroying all traps in the process. If it was a double or triple encounter and the player is caught, the next encounter is guaranteed to be a single encounter.

Each dinosaur's habitat contains two trees and jungle vines, which may be cut for jungle logs and vines respectively. The locations of these trees and vines are always the same in each encounter. In the overworld, these four resources are simply placed as trees, though two of those will be replaced with vines during an instance. In the instance, there may be 0, 1 or 2 patches of tall grass, which the player can hide in to avoid being caught by the dinosaur. While in the tall grass, the dinosaur's vision ring will remain the same colour as it was when the player entered the tall grass as long as they are within its radius. Once the player is out of the radius, it will fade as normal back to its original blue colour.

Immediately set about by depleting one of the tree's logs; typically, the dinosaur in question should not be lingering around too long that it would spot the player and flee. Convert most of these logs into spears (leave 6 logs for constructing traps), then set about collecting poison from the frogs (for 3 spears) while also cutting vines if they are along the path - grab at least nine or ten of these in the process.

Once all of this is accomplished, immediately set about setting up the scorpions, loading them up, and preparing the pressure pad. Unlike other construction, it's possible to halt tick the hotspots - meaning that they can be cancelled when one tick remains, which results in the next tick constructing the hotspot. This is particularly useful when the player has limited supplies, as they can simply set up all the hotspots in a short amount of time from a single log and vine.

When the pad is baited, a cutscene will ensue that shows the dinosaur moving into eat the bait, triggering the scorpions to fire. This cutscene can be skipped if the player has 5 kills. Players are automatically placed to the southwest, and the dinosaur is placed to the northeast for the cutscene.

If the dinosaur is killed, the player remains to the southwest; if it is not killed, then the player and dinosaur (if solo encounter) are randomly placed around the habitat.

For tier 2 and 3 dinosaurs, jadinkos will not appear while a double encounter is active.

Don't spend too much time gathering resources to kill both dinosaurs. Bring down one of them, and it will be make killing the second one much easier.

When one of the dinosaurs are killed the traps are not destroyed but you need to skin it before killing the other one, the remaining dinosaur acts as a lone encounter.

Triple encounters have a 1/160 chance of occurring. Three dinosaurs will be present in the habitat, and will patrol in a set pattern, completely independent of each other, usually in a small circle. The middle area is the most dangerous spot to be in, as all three dinosaurs will typically have vision of this area. The pad should be prepared first, with the traps set up afterwards once all the materials are acquired.

For tier 2 and 3 dinosaurs, jadinkos will not appear while a triple encounter is active.

When one of the dinosaurs are killed, the remaining dinosaurs act as a double encounter.

Once the dinosaur is killed, skin its carcass and deposit all loot with the bait box (if you have tier 3 bait box unlocked). Then, withdraw the next piece of bait and quick-start another encounter by right-clicking the launch pad.