Big Chompy Bird Hunting is a quest in which you help Rantz the ogre catch a chompy bird so that he may feed his children.

Rantz the ogre needs to feed his demanding children, Fycie and Bugs, so he wants to go Big Chompy Bird hunting. Problem is, he's all fingers and thumbs when it comes to making ogre arrows.

Could someone please give him a hand? 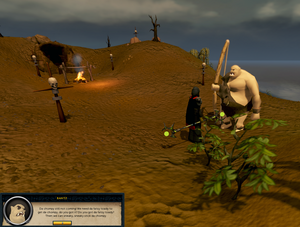 Talk to Rantz, located on the far eastern region of the Feldip Hills (look for

; east of fairy ring aks). He is hungry and wants you to help him make some 'stabbers', better known as ogre arrows, so he can hunt down some chompy birds.

The ogre arrows need to be made by the player; obtaining them from another player, by any method whatsoever, will not work.

Like any arrow, ogre arrows also need feathers, a shaft, and a tip. The shafts need to be made out of achey logs, which can be found all around Rantz, mostly to the south.

The tips are carved out of wolf bones:

Return and talk to Rantz, who plucks out 6 'stabbers' from your inventory. 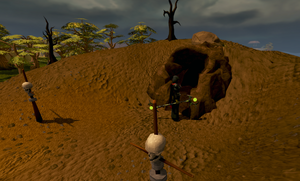 Now that you have found a way to kill chompy birds, you need to next collect bait to hunt them onto convenient ground. Rantz tells you about the swamp toads that his children like to play with. Ask Rantz all of the questions that are listed, or else you won't be able to proceed.

Enter the cave entrance north of Rantz. Speak to Rantz's children, Fycie and Bugs in the cave; they will inform you that they use ogre bellows to bloat up toads, by filling it up with swamp gas. Unfortunately, their father locked up the bellows in the chest in the north-western corner. 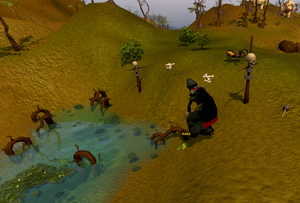 The chest is closed and weighted shut with a large rock; attempt to unlock the locked chest. Unsuccessful attempts will reduce your Strength by 1, although it is not difficult. Once you have pushed the boulder off the chest, search it to retrieve the ogre bellows.

Head back to where you killed the wolves to find the swamp and several toads.

Return to Rantz and talk to him. He shows you where you need to place the toads to lure the chompy birds out. Drop a bloated toad on the spot (a yellow flashing arrow will mark it).

Tell Rantz you have placed the bait. Don't stay too close to the bait, but make sure it is in visible range. Occasionally, waiting too long results in the bait disappearing. Continue placing the bait until you have no more left. On a successful lure, a chompy bird appears; Rantz will take a long shot at it, but misses. He starts making excuses, saying that the arrows don't fly straight. 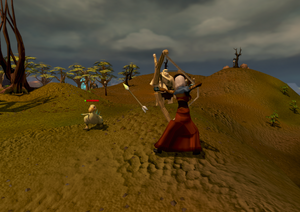 Talk to Rantz and offer to help shoot for him. He will agree and give you a spare ogre bow. If the bird is still around, shoot it, otherwise head back down to the clearing and place another toad (it doesn't have to be on the exact tile indicated at first).

Wield the ogre bow and ogre arrows and when the bird appears, attack it. It is best to not wear any magic or melee armour or else the chompy will not take any damage (see equipment penalty).

If the bird doesn't appear or it flies away before you can kill it, keep placing bloated toads to lure the chompies back. Once you kill a chompy, pluck the carcass and take the raw chompy back to Rantz. He now wants you to cook it for his family as well. 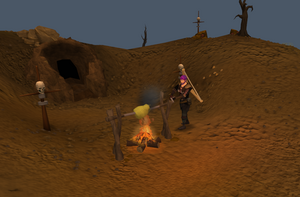 Rantz will name a special ingredient that he wants the bird to be cooked with. He will also tell you to ask the children what they would like the bird seasoned with. Go into the cave and ask both Fycie and Bugs what they want the chompy seasoned with. In all, you will need three different ingredients.

Use the bird on the ogre spit-roast north of Rantz and all three ingredients will automatically be topped up on the bird. Present Rantz with his delicious seasoned chompy bird. 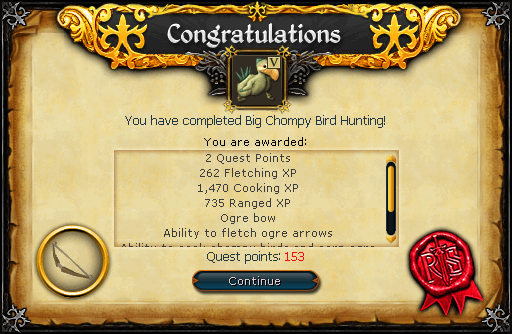 This information has been compiled as part of the update history project. Some updates may not be included - see here for how to help out!
Retrieved from ‘https://runescape.wiki/w/Big_Chompy_Bird_Hunting?oldid=35698938’
Categories:
Hidden categories: