From the RuneScape Wiki, the wiki for all things RuneScape
(Redirected from Betrayal of Falador)
Jump to: navigation, search 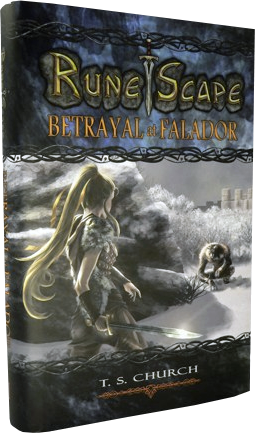 Betrayal at Falador is the first novel in the RuneScape trilogy. It is the second officially licensed publication from Jagex, after the RuneScape - The Official Handbook. It was written by Tom S. Church, and the cover art is by Giuseppe Grassi.[4] It was purchasable from the Jagex Store, but has since been removed. Jagex had announced that it would be released on the 21 July 2008,[5] but was actually released on 25 July.[6] The novel is considered to be canon[7] except where it contradicts the live game.

Jagex said that ten customers who pre-ordered the limited edition hardback cover version would have their copies signed by Andrew Gower, Paul Gower, Geoff Iddison, T. S. Church, and the book's cover artist.[6] However, starting mid-October 2008, Jagex started to auction all ten of the books on eBay at a rate of one per week. The first book was sold on 24 October 2008 for £505, and the second on 2 November 2008 for £310. The rest were sold by the end of December 2008.

The book begins during the winter of the Year 164, five years prior to the current events of RuneScape. During a storm, a statue atop the battlements of the White Knights' Castle in Falador falls from its position, forcing a number of white knights to leave the castle and retrieve it. Amongst these is Squire Theodore, apparently a young White Knight in-training.

As the statue is being brought into the castle, a young girl is suddenly teleported to a point near the entrance of the castle, apparently injured and near death. Theodore discovers her and, hoping to save her life, helps to carry her to the castle ward. The matron attempts to save her under the supervision of Sir Amik Varze, the head of the White Knights and ruler of Falador since the Asgarnian King Vallance fell ill. The girl is found to have in her possession a sword made of an unknown metal, a mysterious white flower, and a shattered ring of unknown nature.

Meanwhile, outside Falador, terror ensues as a creature begins to feed on travellers traversing Asgarnia's roads. Theodore, initially unaware of the monster, is sent to Taverley to seek the knowledge of the druids concerning the flower the girl had in her possession. Once in Taverley, he meets an elderly alchemist named Ebenezer and his young companion Gar'rth, alongside Theodore's old friend Castimir who had spent years training in the Wizards' Tower of southern Misthalin. With the aid of Kaqemeex, a druid of Taverley, Theodore finds that the flower is a white pearl, a flower known to grow atop of both the nearby White Wolf Mountain, and the perilous Ice Mountain.

As this occurs, a violent group of men loyal to the H.A.M. cult enrage a group of country folk to the north of Falador, convincing them that the "monster" that has been terrorising Asgarnia is the dwarf Doric. Doric, having lived in the area for two dozen years, is confronted by the drunken mob in his home north of Falador. They beat and rob him, finally accidentally burning down his home and retreating in shame. The monster, previously having planned to eat Doric, instead pursues the H.A.M. Speaker and his men, killing them in the night.

Theodore discovers Doric in the process of his return to Falador, and offers to aid him in pursuing legal action in Falador. Doric reluctantly agrees, and both are forced to flee when they sense they are being chased by the monster. The monster pursues them, smelling on them "the scent it is looking for". Upon returning to Falador, they find that the girl, Kara-Meir, has awoken, and that the ring she had been carrying was one of a set of 50 rings of life once given to knights of Falador pursuing the most dangerous missions. They speculate that Kara-Meir could be the daughter of Sir Justrain, a White Knight who had in the past made accusations concerning a traitor within their midst and resigned before he could be expelled for this unproven accusation. Justrain had been given such a ring afterwards in recognition of his merits and tasked with spying on the Kinshra.

Kara-Meir, as she recovers, slowly shares her tale. During her childhood, her small village in northern Asgarnia was raided by a group of Kinshra under a deformed commander named Sulla, slaying her parents and leaving her the only survivor. She was saved from freezing by Master Phyllis, an elderly dwarf who raised her. It was the dwarves who gave her the name 'Kara-Meir'. She had only recently attempted to revenge herself upon Sulla, but was nearly killed when he succeeded in defeating her. The ring of life had saved her, teleporting her to Falador. She shows an affinity for swordsmanship, defeating Theodore's rival, Marius, in a mock-duel.

The monster, revealed to be a werewolf from Morytania named Jerrod, attempts to enter the White Knights' Castle, but is unable to due to the holy barrier protecting the castle. He takes up residence in the home of a beggar, whom he eventually kills to hide his identity. Sulla, meanwhile, ascends to lordship of the Kinshra by assassinating their leader. He then begins to put into motion the events of the War of 164, in which he hopes he can gain control of Asgarnia. As he weaves his plan, however, he begins to have dreams of Kara-Meir, whom he believed dead after her failed attack. Because he has slain so many, he cannot remember her from the village raid ten years before.

Jerrod eventually manages to kidnap a young White Knight peon named Bryant in an attempt to lure out Theodore, whom he believes has information related to what he is chasing. During his interrogation, Jerrod wounds Bryant, but tells him not to worry, as contrary to human stories, an ordinary Human with no werewolf ancestry cannot be turned into a Werewolf. Jerrod is soon attacked by Doric, Theodore, and Kara-Meir, only narrowly managing to escape. Bryant, who had escaped ahead of his companions, is met by a fellow knight whom he hopes can help him. He is killed, but apparently he manages to kill his attacker, Sir Balladish, before he can escape. Kara-Meir fights off Jerrod, cutting off two of his fingers and an ear. Jerrod's blood turns out to be black, and the group thus speculate that the creature they fought was a werewolf. This suggests to the reader that werewolves possess black blood. Bryant and Balladish are discovered dead, and Balladish is deemed the traitor of Falador.

Shortly after, Kara-Meir, learning from Theodore that the knights had been attempting to use her as bait to lure out the traitor, flees from the castle. Theodore and Doric set out in pursuit of her, and correctly guess that she might stop at the Barbarian Village. It is in the town's longhall that Kara-Meir meets Ebenezer, Castimir and Gar'rth. While there, Gar'rth gets into a fight. Theodore and Doric, having entered the hall in the midst of the conflict, observe quickly that his blood is black. It is here that it is discovered that Gar'rth is not human - He is himself a werewolf. It transpires that Ebenezer was aware, but does not believe that Gar'rth is an evil man, and has shown him compassion and care. He intends to take Gar'rth to the Monastery near Asgarnia's north-east border in the hopes that he may be cured. Kara-Meir wishes to journey to the Monastery as well in hopes of information on her true name and parentage, for her father took her there to be blessed during her childhood. The group are guided by the barbarian priestess Arisha, who intends to learn the monks' art of writing for the sake of her people. Once they have arrived at the Monastery, Abbot Langley offers to help Gar'rth, as well as to help Kara-Meir research her father. An exorcism fails to cure Gar'rth, but it results in his will becoming his own - He can now control his lycanthropy.

Jerrod pursues the scent to the Monastery. While in the woods, he meets Sulla and a small army of Kinshra soldiers, all moving towards the Monastery to test Sulla's war machinery by means of an attack. Jerrod explains that the scent he pursued was Gar'rth's, and that he has been ordered by Lord Lowerniel Vergidiyad Drakan of Morytania to bring him back. The two agree to help each other, Sulla hoping to use Jerrod in battle and Jerrod hoping to capture Gar'rth and get revenge on Kara-Meir.

The Kinshra force attack the Monastery using mortars provided by the chaos dwarfs. Jerrod is again repelled by Kara-Meir, but both Gar'rth and Kara-Meir are trapped in a cave-in during their escape. The rest of the visitors manage to escape with the surviving monks, but Doric, Castimir and Theodore turn back for Kara-Meir and Gar'rth. While they ride back, Kara-Meir is brutally beaten upon discovery, and Jerrod attempts to coax Gar'rth back into his wolven nature. When beating and insulting him prove insufficient, the Kinshra use Kara-Meir as bait, Sulla hoping Gar'rth will devour her.

Before Gar'rth breaks, however, Theodore and the rescuers arrive, Castimir disorienting the Kinshra with a series of fire strikes. Gar'rth and Kara-Meir manage to escape their bonds, joining the rest of the group in their flight of the Monastery. Sulla and the Kinshra are unable to pursue them, as the group had let loose most of their horses during the chaos. Furthermore, Theodore manages to capture a low-ranking Kinshra officer named Gaius. After three days, Theodore and his companions arrive in Falador once again, where they find thousands of refugees packed into its walls. Sir Amik Varze explains that, as they were gone, the Kinshra had begun a violent campaign in northern Asgarnia, destroying villages and farms.

Captain Ingrew of the Falador City Guard oversees the defences of Falador, aiding Ebenezer in the construction of trebuchets but ignoring the architectural ideas of Doric. Kara-Meir, Theodore, Doric, Gar'rth and Castimir set forth from Falador once again, this time intending to journey to Ice Mountain in the hopes to gain the alliance of the dwarves. Amidst the activity, Gaius is confronted in his cell in the White Knights' Castle by an unidentified individual. The man explains that he will help Gaius escape the next day if he will deliver a message to Sulla. Meanwhile, Daquarius, a high-ranking member of the Kinshra, leads his knights to Burthorpe. They manage to confront Crown Prince Anlaf, heir of King Vallance. Sulla's witch, The Sybil, had managed for months to torment Anlaf in his dreams, urging him towards Zamorakianism due to Sulla's desire to use the Imperial Guard. Lord Daquarius manages to weaken Anlaf further and bring him over to their side.

The novel culminates in the Siege of Falador, during which Sulla and his forces attack the Asgarnian capital. Ultimately Sulla is repelled, but manages to escape because of Kara-Meir's mercy. He is last seen alone with Jerrod, evidently alive and intending to work together.

The novel's protagonists are last seen in Falador, discussing their plans for the near future.

On the RuneScape Forums Q&A post, T.S. Church stated that there are multiple sequels planned. The sequel, Return to Canifis, was released on 22 March 2011.[8] The third book in the series, Legacy of Blood, was released on 19 June 2012.

There are a few factual mistakes noted in Betrayal at Falador.