From the RuneScape Wiki, the wiki for all things RuneScape
Jump to navigation Jump to search
The Old School RuneScape Wiki also has an article on: osrsw:Behind the Scenes
For the location visited during the Gower Quest, see Behind the Scenes (location).
"BTS" redirects here. For the method of transportation, see balloon transport system. For the time-limited event, see Breaking the Storm.

Behind the Scenes (abbreviated BTS) updates are generally articles that provide a small preview of upcoming updates or updates in progress. Beginning in April 2005, Jagex began posting a Behind the Scenes update at the start of each month. These updates were replaced with Development Diaries and Developer Blogs after Mark Gerhard, the new CEO of Jagex, was appointed in 2009, February 2009 being the last update since Gerhard's appointment. However, in June 2010, Jagex decided to bring Behind the Scenes back, with videos being posted on RuneScape's official YouTube channel. 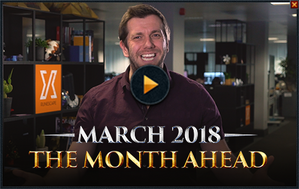 An in-game popup advertising The Month Ahead video

There are currently no Behind the Scenes updates for 2023.