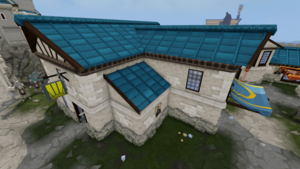 The Rising Sun Inn, around which the woman was known to beg.

Beggar Woman is an unofficial name given to a character featured in the first RuneScape novel, Betrayal at Falador. The Beggar was a poor elderly woman that lived in Falador, the capital of Asgarnia, in the Year 164 of the Fifth Age. She owned a small home in Dagger Alley, a run-down street in the city's low-income housing district, The Dens.

The Beggar lived alone, without a spouse or children. She was known to travel regularly to Falador's wealthier areas and beg for money, often claiming that she was homeless and had several children in need of food. Because she was observed doing this so frequently, and was known to be a liar by many of Falador's residents, the city's outdoor merchants and guards often ridiculed her.

In the Year 164, the werewolf Jerrod infiltrated Falador while pursuing Gar'rth, his nephew, after he fled Morytania. Jerrod witnessed the Beggar being mocked by several merchants, and after inquiring with them as to her status, asked her for a room in her house to stay in temporarily. He offered her payment in gems, which had been previously been stolen by a H.A.M. Speaker from the house of a dwarf, Doric.

Shortly after Jerrod took up residence in the Beggar's home, she formed a plan to murder him and steal the rest of his gems. Whilst he slept, the Beggar attempted to stab him to death; however, Jerrod's superior senses alerted him to her approach, and he disarmed her easily. He crushed her hand in his own, and taking a large opal from his bag, forced it down her throat. The opal became lodged in her esophagus, and she suffocated shortly afterward.

Jerrod fled the woman's house after the murder, and her body was not discovered for some time.