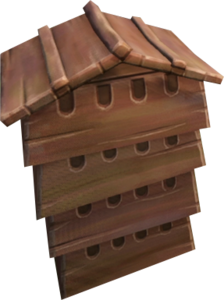 A beehive is a piece of interactive scenery where players can obtain buckets of wax, used in Merlin's Crystal and Troll Romance, and to gather honeycombs, which are used to create honey badger pouches, provided they have insect repellent in their inventory or on their tool belt. If they do not, the player will take 20 life points of damage and not receive the item they were going after.

There are 8 functional beehives west of Catherby. They are all brown, with a white one that cannot be used for normal purposes, as it is a Hidey-hole for Treasure Trails. Right click options:

"Take from" turns an empty bucket into a bucket of wax. There is a single bucket spawn in the area, and Arhein in Catherby has a stock of 30 buckets in Arhein's Store. "Take honey" gives you a honeycomb. Both must be manually collected for each item.

There are 7 beehives to the east at Manor Farm next to the Legends' Guild mine, 4 white and 3 brown but functionally identical. In addition to the regular functions, they can also be fed with different type of flowers to create a variety of special honeycombs which can be fed to player-owned farm animals. This requires 17 Farming, but not the completion of the tutorial. A beehive can be filled with 27 of each type of flower, which cannot be retrieved once deposited.

It takes roughly 1 hour for each honeycomb produced. The honeycombs can be collected when an option to collect honey is given when checking the beehive. Like standard beehives, insect repellent is required when collecting from the hive.

If there are no honeycombs ready to collect, then clicking on the beehive will open the Item Production window to allow selecting which flowers to add as well as the quantity to make.

When honeycombs are ready, then clicking will prompt to collect honey or not, the latter of which allows you to deposit more plants. Unlike what may be assumed, it appears while one honeycomb is produced in an hour, the type of which does not depend on the order of deposition, and is instead random and determined upon collection (i.e. even after the honeycomb is produced in the hive, you can deposit a different plant to have a chance of getting its honeycomb instead). It appears that having more of one type of the plant makes the beehive more likely to produce that type of honeycomb.